Listen to a conversation about life as a teen in two different countries in the 80 compared life now. 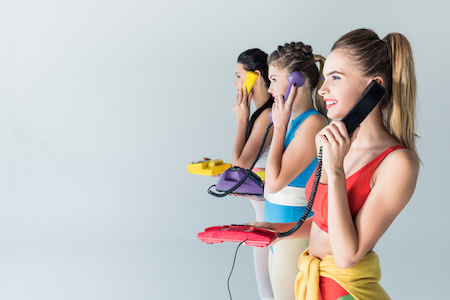 Todd: Rachel, did you grow up in New Zealand?

Todd: Nice. I grew up in the States, and I thought we would talk about how life is so much different for teens today than it was for our generation.

Rachel: Okay. I think we can do that.

Todd: Obviously the first thing is that when we were young, we didn't have smart phones and things like that. We didn't have the internet, actually.

Todd: Yeah. I remember if you wanted to meet a friend, you would have to plan it way in advance-

Todd: You would have to wait by the phone. Remember that, waiting by the phone. You couldn't go outside because if you were waiting for the call, you had to wait at your house until you got the call, and then-

Rachel: We didn't even have an answering machine at my house.

Rachel: We used to have to wait by the phone.

Rachel: I used to spend every afternoon after school on the phone with my friends. After we got home from school, we would call each other, and discuss the day's events I suppose.

Todd: Yeah, you had so much to share. That's true. I think-

Rachel: So, my teens these days, they come home from school, they get on their phone, and they text all their friends.

Todd: Right. And they do it all day, like it's constant. Constant chatter.

Todd: I think maybe that's why I'm not so much into texting. It's just too much work. I like to build up the mystery of not knowing what somebody did for a while.

Rachel: Mm, yeah. But I was thinking about it recently, and I think that it was similar because we used to telephone a lot. But then we did have to wait a long time before finding the news.

Todd: Because a lot of the story line-

Rachel: Are about missed communications and-

Todd: Yeah, and I think I remember when they first started coming out with bottled water. I think I was about 14 or 15.

Rachel: It was a bit later in New Zealand, I think.

Todd: Yeah. That was crazy. I mean do you remember what it was like when people were first drinking bottled water, how strange it seemed at the time? Everyone was like, "Why don't you get it from the tap?"

Rachel: The rivers used to be clean, but they're not so clean now.

Todd: Yeah. How about other things that we used to do when we were kids. One thing is I think compared to kids today, is we used to spend a lot of time outside.

Todd: Actually, our parents would not allow you to stay inside. You had to go outside.

Rachel: You had to go outside.

Rachel: It's the opposite today.

Rachel: They tend to make them stay inside, won't let them go outside.

Todd: Why is that? What's the rationale for why they should stay inside?

Rachel: We didn't used to hear about all of the kidnappings and abuse in the media, so people weren't afraid of it.

Todd: Right. Yeah. And the crazy thing is I think-

Rachel: You hear about it now.

Todd: Even in the state where they hear about this, I think statistics say that it's actually safer that it was before, but the perception is there.

Rachel: Although that could be because the children are all inside.

Todd: I agree. I totally agree. Kids definitely should be outside. And kids should be bored. I think that's one of the things that kids miss out on is boredom.

Rachel: They're never bored now. They've always got a screen to look at.

Todd: Right. So, obviously when we were young, you had nothing to do, so you had to go outside and find something-

Rachel: I thought of something. We used to have video watching parties.

Rachel: Because only one person in 10 had a video machine-

Rachel: We would all go to the video store together, and argue over which videos to watch, and choose some horror movies and some comedies. And then go to one person's house, and all watch them altogether.

Todd: I do remember that. Yeah. It was a big thing.

Rachel: No Netflix binging, but yeah, having a video party at someone's house was a big deal.

Todd: And I think movies were a much bigger deal back then because we didn't have screen time. There was no such thing as screen time. You had your TV, but that was not the same thing. Your parents wouldn't let you watch that much TV anyway. And so a movie was a big deal.

Rachel: It was more of a big deal. You didn't just watch it on Netflix when you were bored.

Todd: Yeah, but a kid these days, it's just they're on their screen all the time. It's just more digital pixels. Yeah, different times.

not (so much) into

I am not so much into texting.

Here, not so much into means to not like something. Notice the following:

Something that is old school was common before but not anymore. Notice the following:

They started coming out with bottled water.

Here, to come out with means to offer something new. Notice the following:

There was no such thing as bottle water.

No such thing refers to something a person feels does not exist. Notice the following:

When you build something up, you try to create interest in it. Notice the following:

A rationale is the reason for something. Notice the following:

One thing the kids miss out on is boredom.

When you miss out on something, you do not get the chance to experience it. Notice the following:

a big thing / a big deal

It was a big thing.

When something is a big thing, or a big deal, then people consider it important. Notice the following: