Todd and Natalie talk about the differences between some different types of fishing. 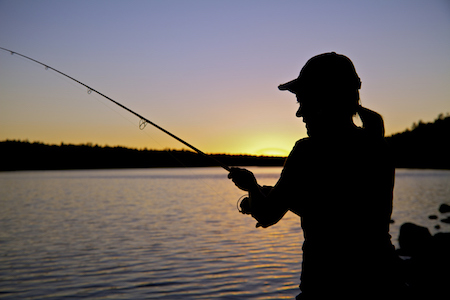 Todd: So, Natalie, you are a fisherman.

Todd: Yeah. So, I thought we would talk about different types of fishing.

Todd: Alright, so, we'll just name them really quickly and then we'll go over them in detail. So, there's, like, pier fishing.

Todd: Sitting on the dock of the bay. That's kind of easy. Then there's fly fishing.

Natalie: Tenkara rod fishing, so, it's another kind.

Todd: Okay. Okay. So, can you kind of explain each type? Like, what do you actually have to do?

Natalie: So, the first one is pier fishing. So, this is where you're stationary for the whole time. It's basically sitting on the edge of a pier. It's pretty self-explanatory. And you're probably catching small fish that just come into the pier - perhaps some schools of...

Todd: You don't have to whisper...I'll just cut it out.

Natalie: Oh, okay. Trying to think. Perhaps a small school of sea bass, for instance, depending on where you are in the world.

Todd: And now I'm, like, you kind of have to hope that the fish wander into your area.

Natalie: Yeah, you do. There's really not much involved. You kind of sit there. You might have a live bait sat on the end...

Natalie: ...so, you might have a - a living fish sat on the end of your hook, and then that'll draw something in. Or you might have a fly, which is - is a - is a fake fish, something that imitates a fish and it imitates its movement. But you - you are literally not doing anything. So, your rod's sitting there and the movement in the water is moving the - the thing.

Todd: Oh, right. Oh, yeah, so that's like when you have - what's it called? The bob? The bobber or whatever?

Natalie: ...so, your live bait. That's pretty heavy, and that's just gonna sink straight down. And a fish is gonna see that and know that something's wrong. A fish is constantly scanning. They're always looking up.

Natalie: So, if they see something still, they're gonna know that that's not something they're worth - that's worthwhile looking at. So, if you have one of these bobble things - it's, like, a fluorescent orange, blue or white ball which has air in it - it's made out of plastic - it helps to lift the fish. It takes some of the weight out of it, and then the fish can move with the tide and it looks more realistic.

Todd: That's really interesting. I had no idea about the - the technical aspect of that, but that makes a lot of sense. And that's the one where, you know, that's kind of, like, the lazy man's sport.

Todd: 'Cause you're sitting in a chair, the guys are drinking beer...

Todd: ...they're listening to the radio, yeah. Although, in - in Japan, where I live now, it's quite popular. You see a lot of people out on the pier at night.

Todd: So, is it better to fish at night than during the day? It seems like I see more people out at night.

Natalie: Yeah, so, we've - we tend to have more success when we fish at night, because the fish are out and they're hunting at night. They're feeding.

Natalie: Yes. So, fly fishing is super active, actually, and there's a lot of skill involved. So, there is a little bit of an association between the different kinds of fishing. So, you have, like, pier fishing, spin fishing, is considered to be less skillful - it's considered to be lazy. And then you have these people who do spin - do fly fishing, and they feel like they're just a little bit better.

Todd: 'Cause they actually have to wade out into the water, usually...

Natalie: So, I've been in the water and we don't have waders - we can't pack them, they're too heavy.

Natalie: So, we go out and our legs are just, like, purple by the time we come in.

Natalie: Yeah, so you have to take little breaks. But yeah, so, basically, you don't have the - the spin rod that you would use on a pier, where you're just stationary. It has an ejection system, so when you throw - when you - what we call 'casting' - when you cast your line out with the hook on it, you can get pretty far with one of these ejection systems. You don't have to do much with your shoulders to get the line out pretty far. And that's the game. You need to get it far. It needs to be in a deeper water, particularly where there's a current. With fly fishing, it's all on you. You have no ejection system. So, you're pulling your line out as much as possible so that you can get momentum on it. And you're swinging your arm back and forth for ages until you can get a far enough throw, with enough momentum behind it, so that you can get your hook out into that deep water. So, it's all on you. And you can get a hook in your back if you don't do it properly - that really hurts. You can end up getting your hook stuck somewhere under a log in the water, or it might just flop and fall down, and just - you won't catch anything.

Todd: Yeah, I've been fly fishing a lot - or I went fly fishing a lot when I was a kid. And it's fun, it's - I think, a lot more fun than reel fishing because one, it's just the action part and two, there's a bit of an intelligence involved. So, you're trying to trick the fish, and you're trying to fake that your fly is like a mosquito. So, like, when you go out on the - on the water - an insect lands on the water, or that's what the fish thinks it is...

Todd: ...he comes up and he grabs it. And plus, you have the whole physical aspect of having to balance yourself in a stream on a floor - on a riverbed that might be moving or not really be, you know, set...

Natalie: Yeah. I mean, it's interesting, as well, that's another difference. So, you're right. You are imitating a fly or an insect that's landed on the surface of the water and, as the fish are always looking up when they're hunting, they see that and then they go for it. So, that's the difference between - you can't have a live fish on the end of a fly fishing line, 'cause you will kill yourself trying to get the line out. It'll be so heavy. A fl-fly fishing line is supposed to fly in the wind - the wind is also a huge challenge, as well. It's really light. You have barely any weight on the end of it, so it is all about your movement and how much momentum you can put behind it.

Todd: And the - and the tying the flies is an artwork, right?

Natalie: ...umi knot - uni knot? You have all kinds of different knots that you have to do, and you have all kinds of equipment that you have to use in order to - to get the right knot. But that's a really good point. If you don't make the right knots, and you get a fish hooked on the end of your line, that line's gonna snap. You're gonna lose the fish and your hook and your fly.

Todd: ...have your line break.

Natalie: Yeah. It is. 'Cause it takes forever to put it back together.

When something is politically correct, you say it in a way to be polite and not cause offence.

A school is the name for a group of fish.

Something that is fluorescent is really bright and reflects lots of light.

You will see people out on the pier.

We use the word 'out' with many phrasal verbs. It is often added for emphasis to show something became present. If you remove it, the sentence maintains the same meaning.

With fly fishing, it's all on you.

When something is all on you, it is your responsibility

You will kill yourself trying to get the line out.

The phrase, to kill yourself, is an exaggeration to show that something is difficult.