Todd and Natalie continue their talk about types of fishing and the morality of fishing. 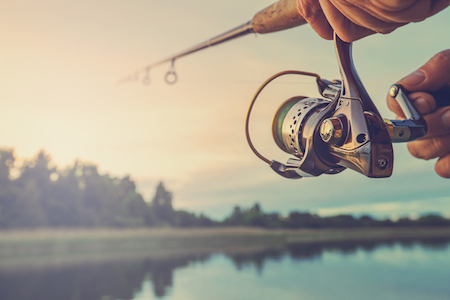 Todd: So, we're talking about different types of fishing. And we've talked about other ones, like fishing on the pier, in the last interview. So, what about trawling?

Natalie: Yeah, so, I haven't actually done any trawling myself. I've watched TV shows about it, and I think that...I guess, so, when people are trawling for crab and things like that - it's where they're going out into really, really deep water. They're going into open sea at this point, and they're collecting, I guess, as much of the - the fish, or whatever it is they're trying to catch. But we were saying that it does feel a little lazier. I mean, this is a - this is - it's less of a recreational thing, isn't it? It's more of a - it's a business, being a trawl fisherman. So, they're going out really early in the morning. Well, it's still night because that's the best time to fish. And they're pulling in hundreds, maybe even thousands, of - of whatever it is they're trying to catch. So, really, there is no skill involved. The - the boat is doing it all.

Todd: Yeah. Th-that's interesting that you say that because, actually, I was thinking of trawling in lakes, and it is done recreationally. So, when I grew up, what we would do is go out on a boat, and you sit in the boat, and you just drop your line off the boat. And the boat pulls you - just drives around - and it's pulling the lure, and so it looks like there's a fish swimming in the water. And then other fish will come and grab it. And then it's, like, oh, you've got one. And, actually, I think that's how they catch sharks as well, like, when they go shark hunting...

Todd: ...in, like, the ocean, yeah. But you're right, it's not - you're just sitting. But they're - sometimes, I think the fish are a little bit bigger. You can get bigger fish...

Todd: And that's the exciting part, because then you - can you pull in the fish without breaking your line, without it - the fish getting free from the hook? So, let's talk a little bit about the morals of fishing, now. It's very controversial. So, are you catch and release or are you - you like to eat the fish?

Natalie: Okay, so...when I've caught fish in the past, I caught a really small sea bass in Australia. I let that one go, but...that was because it wasn't big enough to eat. So, I think if I caught a fish that was big enough to eat, that wasn't, perhaps, like, a sand grain or it's, like, a bottom-feeder that wouldn't taste good, I would eat it. And - and I have a - this is why I feel, like, as human beings - the more that I've traveled, particularly in the more remote places I've traveled in, I feel, like, as human beings, we - if we're gonna eat this food, right? We're gonna eat fish, we're gonna eat pork, we're gonna eat cow. Someone, somewhere down the line, is having to do the really tough job for us, right? So, perhaps if you're a vegeterian, it's different. Obviously, it is different. So, I feel, like, as a human being, if I'm willing to eat that food, I need to be able to kill it. So, that's something that I have to deal with myself. And if we were all, perhaps, more primitive - we didn't have these kind of businesses that do this all for us - you know, slaughterhouses and, you know, like, these big organizations that kind of deal with the ugly stuff for us - we would have to do it ourselves. So, fundamentally, as a human being I feel like I need to be able to gut a fish and eat it.

Todd: Yeah, well, the - well, if you go out with my friends - you're moving to Japan.

Todd: We're in Bangkok now, but you're moving to Japan. I'm from Japan. My friends go fishing a lot and they do it Japanese style, which is pretty amazing. You catch the fish - they actually cut it up right there...

Todd: ...and then you eat the sashimi on the spot.

Natalie: Yeah. So, I did that in the Phillipines and it was amazing. So, the thing is - is getting over gutting the fish and - and kind of dealing with the mess around that. But the sashimi was amazing.

Todd: Yeah, it is fantastic.

They're going into open sea at this point.

At this point means at this moment in time, or currently.

When you do land one it can be a fight.

Here, to land something means to get something.

Someone, somewhere down the line.

Here, down the line means at a later stage

Something that I have to deal with myself.

When you deal with something, you give it attention in order to satisfy something.

Eat the sashimi on the spot.

When you do something on the spot, you do it immediately, without preparation, or planning.

The main thing is getting over gutting the fish.

When you get over something, you no longer let it bother you.