Jerri talks to Todd about her experience using a co-working space. 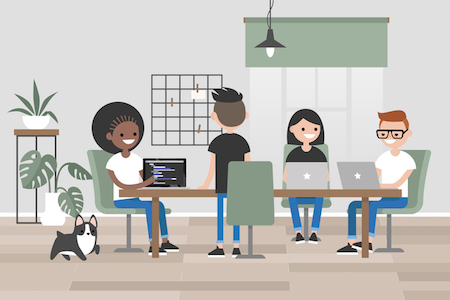 Todd: So, Jerri, you work at a coworking space.

Jerri: Yes, of course. So, I started working in the coworking space scene for about a year and a half. And just during this time, I have seen quite a difference from when I started to now. So, there's a lot more Thai startups coming in. When I first started, our customers were mainly expats and businesses from outside of Thailand who were looking to start something in - in - in Bangkok, and now we see a lot more younger Thai startups coming into start working in coworking spaces rather than in a corporate office or in coffee shops, for example, because, I think, they realize the importance of networking and just getting to meet other people from different industries, and that it makes, like, a difference where you work at.

Todd: That's so interesting. So, can you - can you tell us how a coworking space works? Like, how the building is designed and what people do.

Jerri: Yes, of course. So, I think different coworking spaces have their own goals and their - what they want to represent, but at the Hive we want to be a coworking space that is - that is good for, like, new startups, so we try to be as flexible as possible. We want to think of ourselves as, like, a boutique-style coworking space rather than a corporate one. So, our building is designed to - we have six different floors. We have a spa floor. We have a rooftop where we do events. And we try to create an environment that it's good for working and also make people feel relaxed rather than being in an - in a corporate office.

Todd: Wow, that sounds really interesting. So, is it, like, a thriving business? Like, is it growing? Do lots of people work?

Jerri: Yes, definitely. Like, in Asia, I think it's growing a lot. We are - due to this growth, we are expanding at the same time, in Asia. We see, yeah, our spaces is, right now, a hundred percent occupied, so it's definitely a growing business. And you can see that there's a lot more events going on in the city related to startups, people doing - especially in, like, cryptocurrency or in the online marketing business side, yeah.

Todd: Alright, so, what kind of people gravitate towards these coworking spaces?

Jerri: We - We have many different industries, but I would say, like, the dominant ones are in digital marketing, and online branding is becoming very popular - and also, yeah, as I mentioned, like, cryptocurrencies. We have a few stand-out ones like - I think, like, a trend that is coming is sustainabilities, so a lot of, like, fashion brands becoming, you know, new startups that are sustainable, offering sustainable ways to do your business. So, we have, like, a company here - they offer, like, green - green solutions to your business. Yeah, so I think, like, the - the green side of things is definitely, like, a trend coming, as well.

Todd: And, I guess, one of the biggest allures is - it's cost effective, right? So, for - if you're a startup, you don't have to pay for expensive office space...

Todd: ...or stuff like that. So, can you talk about the cost - like, the cost differential between...?

Jerri: So, we offer, like, a var-variety of memberships. And the way which we try to match, to match the needs of entrepreneurs is we ask, okay, what do you need? Do you need twenty-four hours? Do you need printing? Do you need meeting rooms? And all of - all of the memberships varies depending on if they need unlimited access - or do they just need to come here, like, once and twice a week? The price we try to be - you know, we try to keep it reasonable but at the same time competitive, too, 'cause it's a thriving business, as you say. So, we start from - a membership starts from 3600 and they go up to 7000 for a fixed desk.

Todd: Okay, so how much is that, like, in euros or in dollars?

Jerri: I'm not sure what the currency rate is right now.

Jerri: Yeah. This is for the entire month. Yeah.

Todd: Wow. So you get, basically - you don't get an office, but you get a desk, right?

Jerri: You get a desk which is, like - it's like being in an office but sharing it with other people. So, you have a desk, you have printing, you have meeting rooms. It's like an open-space office where you get to interact with people around you or, if you prefer a quieter working environment, as I mentioned, we have different floors. So, each floor kind of had it - ha-has its own, like, purpose and its own, like, atmosphere.

Todd: Wow. That sounds great. What a great deal.

Jerri: I would hope so.

Our customers were mainly expats

An expat is someone who lives in a country they weren't born in.

to think of yourself as

We want to think of ourselves as, like, a boutique-style coworking space

Here, "to think of something as --" means to consider yourself as something.

A startup is a business that has just started, usually in the tech industry.

What kind of people gravitate towards these coworking spaces?

We have a few stand-out ones.

When something stands out, it is very noticable. Stand-out is the adjective form. Stand out is the phrasal verb form.

but at the same time

Keep it reasonable but at the same time competitive.

Here, the phrase but at the same time just means but also. It shows a slight contrast within something.