Todd and Jerri talk about some startup companies in Thailand. 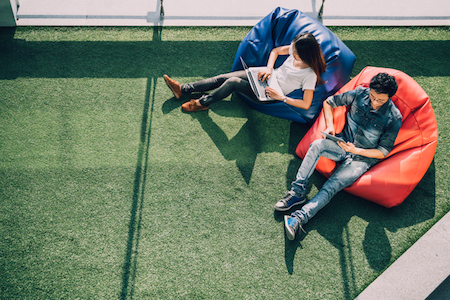 Todd: So, I'm here in Bangkok, Thailand, and I'm at a coworking space called the Hive with one of the managers there. And, Jerri, can you talk a little bit about the young Thai startup scene, and how Thais, maybe, are starting to start their own companies rather than work for big companies?

Jerri: Yes, definitely. So, in recent years, we have seen a lot more, like, young entrepreneurs in the startup scene. I think this is a up-and - like, a new thing for the - the new Thai generation to start their own - you know, to follow their passion rather than sticking with the traditional way, applying for a permanent job at a corporate office, for example. There's a lot more - a lot more risk-taking, kind of, behavior. And, yeah, a lot of them are paying off. I would say that we have seen a lot of startups in the fashion industry, for the young Thais, and then also doing, like, even, like, small coffee shops but with - with unique ideas. Like, giving back to the community, for example. Some startups, you know, some - some of the young Thais, they do have - you know, they might have a job here and there, but then they pursue their passion in a way, like, at the same time. Yeah.

Todd: Now, that's so fascinating. So, can you give some examples of some startups in the fashion industry? Is it...

Jerri: Yeah, sure. So, from the top of my head there's a startup that is quite well-known - it's called Lalalove. It's a startup company that works with people from, like, the north of Thailand to make clothes for them, and then they really work with the local community and try to bring, like, the fashion that was back, like, say, what people used to wear thirty years ago - back to today, but with - with a twist that it's modern at the same time as it's traditional. So, you see, in Thai we call it the sarong, which is, like, a long skirt that you used to wear with a lot of, like - like - like, patterns. Yeah, so that - they bring it back and then maybe they add some, like, glitter to make it modern. But it - it - it is quite well-known. They have, like, about three stores in Bangkok including, like, the big department stores like Siam Discovery. But this just started up as a designer that graduated from university, and this was something that she really wanted to do 'cause she visited local communities in the north - up north - and she really saw, like, the potential of bringing back traditional Thai clothes - you know, what people used to wear - back to modern world today.

Todd: That's - that's fantastic. Yeah, I was a teacher in Thailand - many years ago, probably before you were born, in the nineties - and I do remember some people wearing the sarong back then.

Todd: And you're right, you don't see it very much anymore.

Todd: It's quite rare. So, is this business kind of branching out internationally? Is there an international market for these...?

Jerri: I don't - from my understanding, I don't think they have a store internationally yet, but they do attend quite a lot of, like, fashion shows that is outside of Thailand.

Todd: Okay. Are there any other startups you can think of?

Jerri: Alright, so, another startup - so, as I mentioned, that a lot of young entrepreneurs are going into the food and beverage scene, and especially coffee shops - there - there been a lot of emergence of coffee shops in Bangkok. All have their own, like, little unique style, and there's one that really stood out for me. It's called Patom Organic Cafe. It's actually quite near th-the Hive, where we are, the coworking space - about ten minutes away. And what's special about this cafe is that the - the founder really wanted to support the farmers who are in the - outside of Bangkok. So, all the coffee beans are sourced from the farmers and then they - they make, like, coffees like organic coconut milk with roasted coffee from Nakhon Pathom, for example. And they have their own very - their very own foundation called the Sookjai foundation. I think part of the profits that the company get, they put it to that foundation. So, it's, like, these coffee shops that you see, like, you know, wandering, they can make a - can go toward something. Yeah.

Todd: Oh, that's awesome. That's so cool. So, it sounds like there's a really vibrant scene and things are really moving up.

Jerri: Yes, definitely. Very exciting for - like, especially to be in the - the startup scene yourself, like, working in a coworking space - yeah, you see a lot of people walking through the door and just learning about what they do. It's always interesting.

Todd: That was great. Okay, so now we've done two.

Follow their passion rather than sticking with the traditional way.

When you stick with something, you keep doing it even though there are other options.

A lot of them are paying off

When something pays off, it means it becomes successful or produces a benefit.

Giving back to the community.

To give back means to contribute to a group that you benefit from.

With a twist that it's modern

A twist is something new or unexpected.

Is this business branching out internationally?

To branch out means to build on what you've done and do something new, or to expand a business.

There's a really vibrant scene and things are really moving up

A vibrant scene refers to a very lively environment that has a lot of excitement.