How International are you?

Katie and Todd discuss expereinces with people, food and cultures, movies and more. 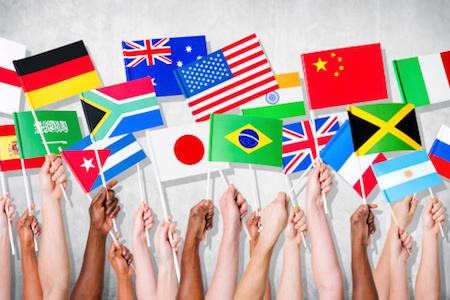 Todd: How international are you? Let's find out.

Todd: First, have you ever eaten Greek food?

Katie: Greek food? Ah, I've eaten, how do you say it, falafel.

Todd: Oh, is that Greek?

Katie: I think so. I've had that, but apart from that, I've never eaten Greek food. How about you?

Todd: Ah, I think I have. Like, I've eaten Greek yogurt. Does that count?

Todd: OK, have you ever eaten Russian food?

Todd: I think, Russian food, is it borscht? Borscht is like a cabbage soup.

Todd: Yeah, maybe I haven't eaten Russian food either. OK, last one, have you ever eaten Vietnamese food?

Katie: Ah, I see it written down. Is it pho?

Todd: Yeah, I've been to Vietnam so I've eaten Vietnamese food a lot. And pho the noodles is really good.

Todd: I've had that too.

Todd: Oh, OK. Have you ever studied French?

Katie: I have. I studied French for five years.

Katie: Nope. Not at all.

Todd: Yeah, me too. I once studied French years ago, but I haven't spoken French in so long I can't remember anything.

Katie: I can't remember anything either.

Todd: Have you ever studied an Asian Language?

Katie: I've studied Japanese. I can still speak it a little bit now, and I studied a little bit of Korean, but I don't speak Korean.

Todd: Oh, really. OK. Wow, like I've studied Thai because I lived in Thailand for five years, and like you I've studied Japanese, but my Japanese is terrible.

Katie: How about your Thai?

Todd: My Thai is OK. It's OK. I can talk a little bit. OK, so have you ever met a Spanish person?

Katie: A Spanish person? Actually, I don't think I have.

Katie: I don't think I have met a Spanish person.

Todd: Oh, interesting. I've been to Spain so, I've met a few and we have a Spanish teacher at our school.

Todd: OK, have you met a Chinese person?

Todd: OK, and have you met a Brazilian person?

Katie: I feel like if I say no, then I have. Probably. Probably, I've met a Brazilian person.

Todd: Have you ever seen a German movie?

Katie: Even English movies, I haven't seen very many.

Todd: Well, have you seen a Canadian movie?

Todd: Well, the thing is, in Hollywood in America, all the famous actors are Canadian, so I think everybody's seen a Canadian movie.

Todd: Yeah, all actors in America are Canadian it seems like.

Katie: I think so.

Todd: OK, have you ever bought something from Italy?

Katie: From Italy. I have. I have bought - not for me - but I bought my mother a bag from Italy one time.

Todd: OK, what was the brand?

Katie: I have no idea. She asked me to buy a brand and I bought it, but I don't know which one it was.

Todd: OK, have you bought something from Japan?

Todd: OK, and now we'll move on to countries.

Todd: Have you ever been to France?

Katie: I have. Actually, I have been to France a couple of times. My high school has a house in France, so for our school trips we would go to France every year.

Katie: Yeah, how about you? Have you been to France?

Todd: You know, I haven't really. I took a bus from England to Prague, so the bus drove through France, but it never stopped.

Todd: What other countries have you been to?

Todd: Wow, you've been to a lot of places.

Katie: Yeah. How about you? What countries have you been to?

Katie: Wow. Which country did you like the best?

Todd: Oh boy! That's impossible. I will say this, I love ... I love Seoul. I love Seoul, Korea. It's a great city. OK, anyway, thanks Katie.

Point 1: Use the present perfect to talk about experiences.

Point 2: Use the particle 'yet' in questions to ask if an action occured.

Point 3: Use 'already' in affirmative statements. It can go before or after the verb. Also, the answer can use the past tense.

7 Present Perfect - Experiences
What cultures have you become familiar with?
﻿
INT 4
Meg Todd

8 Modals of Obligation
See what Meg has to do.
﻿
INT 4
Sarah Todd

9 Present Continuous - Future
What are you doing this weekend?
﻿
INT 4
Sarah Todd

10 Zero Conditional
When you are sad or sick, what do you do?