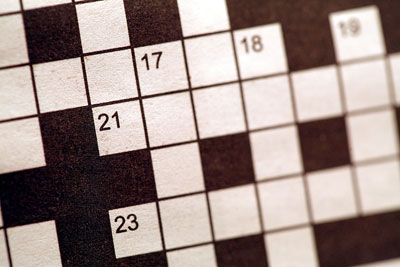 Do you like doing crosswords? I used to do crosswords almost every day a few years ago, I really got into the habit of doing the crossword or one of the crosswords in the paper we used to get every day, em, that was back in Ireland so, I don't know, I think, it's a habit that you get into and then, I don't know, for me it was very easy to fall out of that habit again, but just now I looked for a crossword in a magazine I bought today so I was quite excited about the idea of doing a crossword cause people have told me that it's good to do crosswords because it makes you, well, it makes your brain work a bit more maybe than it usually does so it's good to keep, keep your brain cells alive I think is the idea so I looked for a crossword but the only crossword I was able to find was a cryptic crossword and, to be honest, I've never ever done a cryptic crossword. I think I stop even before, I don't even read the clues cause cryptic crosswords, they just seem completely, I don't know, like, gobbledegook to me, something that makes no sense. So I think with crosswords the important thing is that you really have to find a crossword that's at the right kind of level for you so it's still a bit difficult but easy enough so you can get at least a few clues to help you out with the rest of it, that's why I liked doing my old crossword so much because, em, it was, some of them, well some of the clues would but be quite simple, then the next level would be kind of make you think really hard, but eventually I could get some of them and then, then I'd maybe leave it for a while, for a few hours even or something until I had a break and go back to it, then suddenly, out of nowhere, another one or two answers would come, so it's, it's quite funny the way you can, you can stare at a crossword for what seems like, I don't know, hours, sometimes and, and be completely convinced that you don't know the answer and then, later, once you've, you know, taken your mind off it completely you can come back and ah!, there it is, there it was all the time and yet, just, I don't know maybe you needed that break for, for the answer to come to you. I kind of like that about crosswords. I don't like crosswords that are too easy, cause there's no challenge then so I like crosswords that make you think a bit, but this cryptic crossword, it's just, I don't know, it's a bit scary I think, I find it difficult to approach them, none of it makes sense so maybe I'll just try and find another one.

370 Ageing
Vivian talks about what it is like to get old.
BEG 3
Marion

369 Venice
Marion has a problem with her glasses.
BEG 3
Marion

368 Glasses
Marion has a problem with her glasses.
﻿
BEG 3
Marion

367 Messy Room
Marion has a problem with her glasses.
﻿
BEG 3
Marion