Ruth talks about her family. 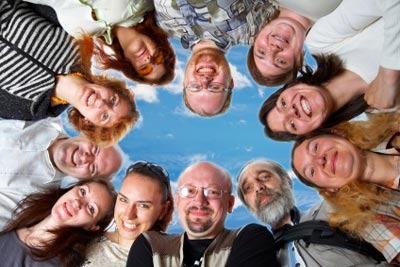 Akane: So, um, how big is your immediate family?

Ruth: Ah, there are four of us.

Akane: Four people, OK. Whose in it?

Ruth: Not big really. Well, there's my mum and my dad and my older brother and then there's me.

Akane: Oh, I see....Does everybody still live together?

Ruth: Well, actually at the moment my brother lives in London and my parents live in Darbyshire and I live in Japan but very soon we are all going to move back in together.

Akane: Ooh, are you looking forward to that?

Ruth: I'm looking forward to it but I think it could be interesting.

Akane: Yeah, for sure.....So who is the oldest person in your family?

Ruth: The oldest person is probably my great aunt and she's 80.

Akane: Oh, and who is the youngest person in your family?

Akane: Wow! Did you see a picture of her?

Ruth: I have seen a picture of her, yes. She lives in Sweden.

Akane: And how big is your extended family?

Ruth: Well, I'm not from a really big family actually. My dad has got three sisters and my mom has just got one brother, so you know, some people are from families and somebody has ten children, and they have lots of aunties, and uncles. It's not like that in my family.

Akane: Oh, OK. And where is your family originally from?

Akane: Everybody in your family is from there?

Akane: Oh, that sounds really interesting......So when does your entire family ever get together?

Ruth: Well, that's a good question. Well, a lot of people get together at Christmas, but even then not everybody does. I think really we only see the entire family at weddings and at funerals.

Akane: Oh, OK, and when was the last time there was a wedding or a funeral?

Ruth: Um, I think it was about eight years ago, so quite a long time ago, now.

Akane: Oh, I see. OK, well thanks for that story, Ruth.

Ruth: Oh, no problem. Thanks, Akane.

How big is your immediate family?

Your 'immediate family' includes mother, father, brothers and sisters. This can also include step family, like a stepbrother. Notice the following:

Very soon we are all going to move back in together.

I'm looking forward to it but I think it could be interesting.

If you 'look forward to something' you are excited about an event that will happen in the future. You do not look forward to bad events or things that you don't want to do.  Notice the following:

And how big is your extended family?

Your 'extended family' members are people outside your immediate family.  This includes aunts, uncles, cousins, grandparents and in-laws. Notice the following:

When does your entire family ever get together?

'Getting together' with people is spending time or socializing with them, usually in an informal situation.  Notice the following:

immediate family • move back • looking forward
extended • get together