Monica and Todd discuss whether students should be forced to take P.E. classes. 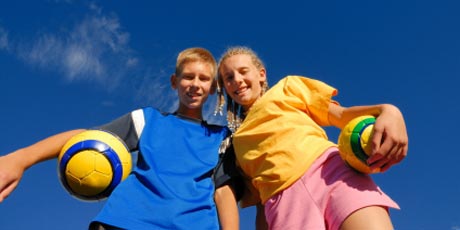 Todd: So, Monica, you are actually a trained physical education teacher.

Todd: So, we often hear about how kids today are not fit, and they don't exercise enough. Do you think that's true?

Monica: I think it is true, yes. I think kids these days spend a lot more time on the computer than they used to, so of course that means less time outside and getting fit.

Todd: Now, in some countries there's a big debate about how much fitness kids actually do in school, so in your country, in New Zealand, do kids still do a lot of fitness actually in school?

Monica: Well, recently the P.E. curriculum got amalgamated with the health curriculum, so P.E. and health were considered to be important in school, and the health side of the curriculum is often taught in the classroom, and of course the P.E. side often taught outside the classroom, and there's always debate about how much kids should be doing inside school. In fact very recently, now that it has become quite a big problem in New Zealand for teenagers, there has been talk about increasing the number of P.E. lessons that students have, but the current Prime Minister I think believes that the emphasis should be put on out-of-school activities like clubs and encouraging students to become more involved in that side of things.

Todd: What do you feel? Do you think it should be?

Monica: I actually agree to be honest, because I think if you increase the number of P.E. lessons that students have in a week, it doesn't actually necessarily increase their motivation to be involved in physical activity, but if like he's suggesting, you increase the opportunities outside of school, students maybe become involved in a sport that they choose, that they'd like to do and they hopefully can take it on as a lifetime sport. Yeah, which is important.

Todd: Butt wouldn't the counter argument be that only kids that have a natural inclination to play sports would want to join those clubs and if the kids that are more sedentary or don't enjoy physical activity won't join a club, so you need to actually make them do fitness at school?

Monica: Yeah, that's true. That is a counter argument, and a very good one … to argue on some other occasion. Of course I can talk about that side of the argument as well if you want me to.

Todd: No, it's Okay. Basically, you saw there's … both sides make a good point.

We often hear how kids are not fit.

When we say the phrase 'we often hear', we are referring to information people hear in general conversation or the news or media. Notice the following:

The curriculum recently got amalgamated.

When two things are amalgamated, they are joined or mixed together to make one thing. Notice the following:

The curriculum was changed by the school.

Curriculum is a set of material or subjects that are taught by a school or class. Notice the following:

There is a natural inclination to play sports.

1001 Logging in Taz
Nick talks about logging in his part of the world.