Abiedemi talks about a popular Nigerian dish made from pounded yams. 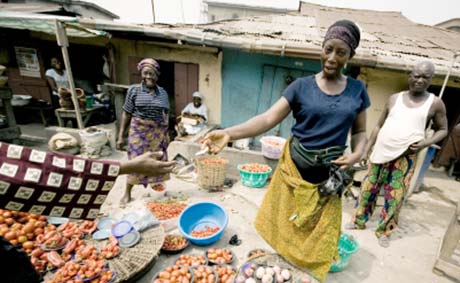 Todd: So Abidemi, you're from Nigeria, right?

Abidemi: Yes, I am, that’s correct.

Todd: So, can you talk a little bit about food from your country?

Abidemi: Yes, gladly. I love eating, so food is one of my favorite things to talk about. In Nigeria, we eat a lot of food that’s made of potatoes or yam so one of my favorite foods from Nigeria is called Inyan. Inyan is pounded yam. And what we do is we boil yam in a pot and then we put it into like what we call a pounder. I don’t know how you say in English and we use a mortar and a pounding stick. And we pound it for maybe 20/30 minutes, usually the women do this and it comes out really sticky. And we eat it with our hands and with a sauce, kind of like tomato sauce with a lot of meat or fish, depending on your region. And it's just really delicious. It's something we eat especially during festivals and like yeah, with lots of music, if you are happy, if you are eating, yeah, it’s really good.

Todd: That sounds really good. So, you said though that it has sauce on it and you also eat it with your hands?

Abidemi: Yes. Normally, we eat it with our hands so they put it in a plate, it’s white in color and beside they’ll put like a stew, it's tomato based with onions all mixed together, grinded together. And then they cook a fish or meat or even a mixture of both in the stew. So when you eat it, you’re eating with your fingers and your, yeah, put it in your mouth, it’s very savory, it's a very savory dish.

Todd: That sounds good. So, how long does it take to cook?

Abidemi: Usually, I would say an hour to two hours because you have to boil, peel the yams, boil the yams and then pound the yams so all that process takes time. And then there’s the sauce, the stew as well that has to be prepared, so it takes time.

Abidemi: It is a lot of energy which is I think mainly why it’s eaten during festivals or when people have a lot of time or people that are just at home, yeah, special occasions, that’s when we have it.

Todd: So when you pound the yams, do you just do one yam at a time or are you doing many yams at once?

Abidemi: You’re doing many pieces of yams so the yams have been cut, after they’ve been peeled. they’ve been cut into smaller pieces and you put these into the mortar and then you’re pounding away, yeah.

Todd: Oh, wow. So, and what foods does this go well with?

Abidemi: This is normally eaten by itself but when we have special occasions of course, we don’t only have one dish. We have that, we also have rice that’s made, we call one Jollof rice and it’s made ... cooked in ... I would say it's similar to the Spanish pilaf. So it’s tomato based as well and it comes out red, so you have that. We might have some what we call dodo which is fried plantains in English. So we have different dishes around that, they’re centered around, yeah, we love eating in Nigeria, so yeah.

Can you talk about your countr? Yes, Gladly.

Gladly, it a polite way to say, Yes, of course, when someone asks you do something. Notice the following:

It comes out really sticy.

In cooking, the phrase 'to come out' means " to become.' 'Notice the following:

If a food is tomato-based, then the main element is tomatoes. Notice the following:

It is a very savory dish.

A savory dish is salty or spicy and very tasteful. Notice the following:

We pound the yams with a pounding stick.

When you pound something, you hit it hard repeatedly, usually with a heavy device. Notice the following:

gladly • come out • savory
based • pound