Peter and Sarah debate the use of computers in the classroom and how they use them. 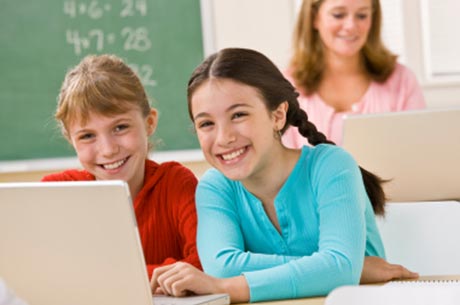 Peter: So Sarah, tell me, you're teaching right now, could you give me your opinion on computer use in the classroom, like using it in your classes, what do you think about that?

Sarah: I think it's good when there's certain activities that are related to using computers. But when you're trying to do an activity that's not on a computer in a classroom that has computers, it's very difficult to get your students' attention because they're often distracted by doing something else on the internet, they shouldn't be doing.

Peter: Oh, I totally agree, I often have that problem, it feels like I'm speaking to a crowd of ghosts. I have no idea that they're talking to me or looking at me or doing anything that they should be doing, so it's really hard. I find it really hard. But I agree also, I think computers can be so useful in the classroom, especially if you have to do a specific activity where students have to find information and listening activities where they can listen to individual listenings and things like that, you know.

Sarah: Yeah. So what do you think about cell phones in the classroom, do you let your students use them? Because maybe they have an electronic dictionary of some sort on their mobile phone. So is that okay, or no cell phones, what do you do?

Peter: Ah, that's a frustrating topic. I think sometimes I find it really useful if students have their smartphones with them and they can do a quick online search of something that they want to do, especially words they want to look up. So the dictionary use I think is quite useful for students. But on the other hand I always have to kind of keep a watchful eye and see what students exactly are up to, you know, they sometimes start playing a game or they sit on Facebook and sit writing notes to their friends and messages come and go. So yeah, I'm always not sure exactly how to handle it, but most of the time my students are pretty good. So they seem to use it mostly for dictionary.

Peter: Yeah. How about your students?

Sarah: Yeah, some of my students use it for ... they have a dictionary on there that they use. But I think though, most of them have a separate electronic dictionary that's only a dictionary. And I much prefer it when they use that because then I know they are really just looking at a word and not on Facebook or doing something else like you just mentioned, so.

Peter: Have you ever taken cell phones away in class from students?

Sarah: No, not yet, I haven't had to, usually when I walk around the room they put it away very quickly if they are doing something they are not supposed to be doing. And if they are using it to look up a word then they have no problem with me seeing what they are doing, so, end of class.

Peter: I heard about a teacher the other day, he said he's got a basket that he collects cell phones with at the beginning of class, and he puts them on his front desk and then at the end of class he gives them back. But I thought, wow, that's quite strict I thought. I don't know if I would do that, how about you?

Sarah: Yeah. I would be worried that some students would forget their phones and then the problem with trying to get them their phone back and all of that, it might not be worth the hassle.

Peter: Yeah, I probably would agree with that.

a crowd of ghosts

It feels like I'm speaking to a crowd of ghosts.

Here, the speaker means that the people in his class are not listening to him or noticing him.

If something is frustrating, it makes you angry or upset. Notice the following:

I keep a watchful eye on my students.

When you keep a watchful eye on something, you watch it carefully to make sure no problems occur. Notice the following:

They are using it to look up a word.

When you look up a word, you read a dictionary to check its meaning or spelling. We also look up details about people or places. Notice the following:

not worth the hassle

It is not worth the hassle to collect the phones.

When something is not worth the hassle, there is more trouble or problems than benefits for doing something. Notice the following:

ghosts • watchful eye • frustrating
worth the hassle • look up