Mark talks about going into the wilderness and living alone and without modern comforts. 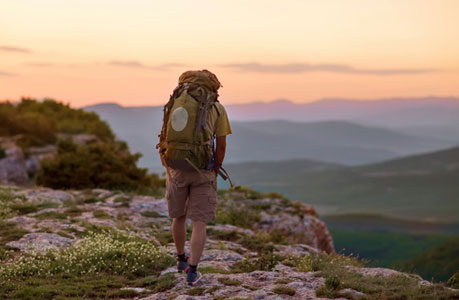 Sorie: OK, so Mark, you were telling us that you were in the wilderness for three days with no food. Can you tell us how you felt, what your emotions were?

Mark: The first day was really interesting. We set off in the morning to find our spot, and we'd been out into the space the previous day to kind of locate a suitable spot, and to make sure we were in a space where there was no other people cause there was eleven people doing the quest, so we didn't want them … we wanted to make sure we didn't bump into these people when we were on this quest so anyway, I chose my spot and we had the previous day taken our supply of water to last three days. That was the only thing we had, and I walked out from the communal camp, and I left the forest, and it was kind of like big open space, quite mountainous and I saw my spot where I'd chosen and I thought, no I don't want to be there anymore. I don't want to stay there for three days, and I kind of felt myself pulled to a different place.

Mark: It was kind of on a slope, but I started walking up this slope, quite a steep bank, towards these set of trees, and when I got there, I found like a flat, flattish space, and I thought "Hmm, maybe I can put my tent here" and I decided I wanted to stay but it wasn't quite flat enough and it was pretty small in the flat space on the side of this mountainous slope so … I don't know what I got. I got some stick or some stones … NO, I had a little trawl cause I and taken a trawl which you take so you can use the toilet, kind of ecologically. So I used my trawl and made it flatter and then I put my tent up on that little flat spot and it was east facing, but it was like across the valley so it was going to take quite awhile for the sun to rise in the morning. That was my only worry.

Sorie: What about the nights?

Mark: It was freezing.

Sorie: Freezing at night and you were cold. Did you make a fire?

Mark: I couldn't make fire because there was a fire ban cause it was mid-summer, which we were very lucky in the vision quest because there was an evacuation order on the very last day and had it happened before we would have evacuated prematurely from the quest.

Mark: So no fire, no fire unfortunately.

We set off in the morning to find our spot.

When you set off, you begin your trip. Notice the following:

I walked out from the communal camp.

Communal means shared by everyone in a group. Notice the following:

We wanted to make sure we didn't bump into them.

When you bump into someone one, you encounter them by chance. Notice the following:

When something is very cold, we say it is freezing. Notice the following:

There was an evacuation order.

When there is an evacuation, everyone must leave an area. Notice the following: