Sorie and Mark talk about living in very basic conditions on a remote island off the coast of Japan. 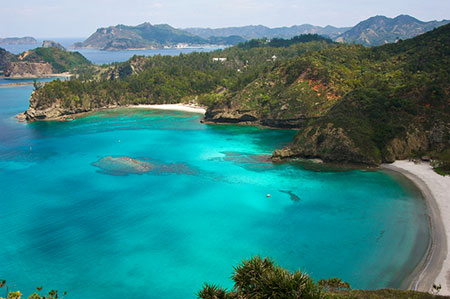 Sorie: So Mark, you and I were married and we've lived in—

Mark: We still are, aren't we?

Sorie: We are married. I said we are married. And we've lived in several special places and I'd like to share our experience of Ogasawara.

Mark: Ogasawara is amazing, isn't it?

Sorie: Yeah. Can you tell us the place, and where it is?

Mark: Ogasawara is a group of islands that's in the Pacific Ocean. And there's no airport there and if you want to go there, you got to take a boat that goes from Tokyo. And that boat takes 25 hours to get there, and it runs just once a week.

Sorie: Okay. And the population?

Mark: There's two inhabited islands in Ogasawara. One is called Chichi-jima and there's 2,000 people, roughly, there. And Haha-jima is about 400 people.

Mark: Yes. And we lived in Chichi-jima.

Sorie: And we lived in Chichi-jima. That's right. And what kind of—we had an amazing lifestyle there. Do you remember how we ended up there and what we were doing?

Mark: Well, our good friend Rio-san has a eco village in the mountain there. And he built the whole place on the side of a mountain with his bare hands basically, with wood and he built his home where he lives with his wife and two children. And he built loads of like cabins, as you might in Thailand or Philippines or somewhere like that, which is quite unusual in Japan. But he built these also with his own hand and he like connected them together with like wooden bridges.

Sorie: Yeah. I remember the day we went to see that little shack. And it was extremely small, four and three. I would say, 4 meters by 3 meters.

Sorie: It was really small.

Mark: That's how small it seemed.

Mark: And there's the ants. Do you remember the ants? They had to build it on the scaffolding because there was white ants. They called them termites, that can eat the wood.

Mark: Do you remember seeing those ants?

Sorie: I remember that. I remember how scared we were when the hurricane -- the typhoons would come and the whole shack would shake. And we'd be like praying so that we wouldn't slide to the side of the hill.

Mark: Do you remember our chickens?

Sorie: Yeah, we had four chickens. What about our toilet, do you remember?

Sorie: Yeah. One of the hardest things was the showers. We had this solar panel-run showers, and when it was cloudy, in the middle of the winter, I would suffer. It was so hard to take cold showers.

Mark: Yeah. It wasn't like very cold was it really compared to mainland Japan but it really, really did feel cold with the wind there. Like you say, when the cloud came across because there was no hot water—yeah, it was tough. But did you remember next to the showers, every two weeks or so in the winter, Rio-san would light up the—make a fire, like wood-burning fire which heated up the outdoor pool?

Mark: And there's no hot springs on the island but we got to sit in the pool, under the stars in the evening.

Sorie: Yeah. There were so many great experiences and to realize also that nature is so powerful. And if you want to live with it, you have to coexist and you have to be very strong to live in a place like that.

Sorie: And do you remember also the community, how everyone was?

Sorie: Hmm, because it's such a small place.

Mark: Exactly. There had to be a strong community in the mountain. There's only 400 people in the mountain, wasn't there? Two thousand total. It was like a separate village from the other village.

Sorie: From the main town.

Mark: Yeah, everyone looking out for each other and sharing. Do you remember the fisherman who used to share his fish?

Sorie: Yeah. He'd bring this big chunks of tuna, fresh tuna. It was so delicious.

Mark: Such good memories there, wasn't it?

He made it with his bare hands.

When you use your bare hands, you make something with little help or tools. Notice the following:

We had a little shack.

A shack is small, basic housing that stands alone outside. Notice the following:

They had to build it on the scaffolding.

Scaffolding is usually poles, often bamboo, used to keep a floor off the ground. Notice the following:

You have to coexist.

When you coexist, you exist at the same time or place. Notice the following:

There had to be a strong community in the mountain.

A strong community is a group of people that are very close and unified. Notice the following:

Everyone looks out for each other

When you look our for other people, you assist them or care for them without being asked. Notice the following:

#1318 Island vs City
Living in the city and on an island.
INT 4
Madina

Video 1318
Could you live on a secluded island?
INT 4
Abidemi

Video 1317
Could you live on a secluded island?

#1320 Being Different
Thinking differently from others.
INT 6
Abi. / Jeremy