Dan talks about slow travel and why he likes to live in one place for at least a few months.

Todd: So Dan we’re talking about your travels and living overseas, and you have a concept you call slow travel. Can you explain what slow travel is?

Dan: Yeah, I mean especially maybe because I'm a blogger, we're always seeking to define things in unique ways. And there’s a lot of terms out there. There’s expat; people that have left their native country. There’s backpacker, which is someone who tries to keep their cost very low and they’re continually moving from place to place. There’s flash packer, which is a term that means you still have income from somewhere and you have more tech and toys, and you stay at maybe nicer hotels.

But what I did was always a little bit different, which is I would go and get long term leases or medium term leases at apartments. So I would go and get a house or an apartment in a place for anywhere from one to six months, and enjoy what it feels like to actually live somewhere. And that to me is so exciting, you know. Although the sights and everything are cool, and hanging out with tourists can be fun, I much prefer to go down to the local café, open up my laptop, talk to the people that are working there, and really get a sense for what it’s like to live in a city.

And over the course of my career what that’s looked like is you really develop a deep connection with the places that you live in. You might hire people there. You have really good friends there. One of the downsides of being a tourist is that you never really can develop friendships. And so what I found is that I go back to revisit a lot of the places that I once lived because I have lifelong friendships there. 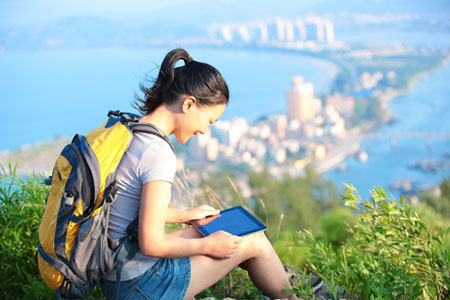 So that to me has really been the benefit of slow travel and I have a theory about friendship. I think, you know, really you can't go to place for just one month. People won’t invest their time in you. So if at least you’re going to stay in a place for three to four months, I think that's sort of the turning point with a lot of people and they’ll say, “Hey, yeah, you know what, let’s go try to be friends. Let’s go out and do something together.”

Todd: So Dan, you’re talking about slow travel and you’re saying that basically you go and just live in a place. And I think a lot of people would be really hesitant to do that. I mean, that sounds exciting but it’s like a really big step. How would you convince somebody to do this type of lifestyle?

Dan: Well, the first thing is to get connected on the blogosphere with a lot of other people who are doing it because I think that once you see other people doing it, the mystery comes away and you realize hey, this is something that I could do. This is achievable for me. So I call that like a precedent case analysis. If you can see some other guys doing it and you can relate with them, not such a big deal anymore.

The next thing is like I always try to go somewhere where I have a project. I think it’s a great way to really get engaged because it’s so easy just to go to a place, get a short term apartment, and then go to Starbucks, and then that could just be your life. Whereas, you know, when we came here to Bali, we decided that we’re going to set up a house and we’re going to invite interns over. And we’re going to meet entrepreneurs from all around the world and that’s why we’re going to Bali because Bali is the place that everybody wants to go. If you mention Bali to somebody, they're like, “I would love to go to Bali someday.” And that’s great for meeting people so that’s why we came here.

My last location in the Philippines, I went there with a project to hire people because I knew it was a great place to hire people. A place before that in Vietnam, I decided that I wanted to do investments in Vietnam. It’s a great place to put capital. Of course, that was before the financial crisis so that didn’t work out for so long. But I find it the idea of having a project gets you engaged.

For me as a business person, I've never gone somewhere and not hire somebody there. And that act in and of itself helps me to get engaged. Now, if you’re not a business person, a lot of people would come to a place like Bali and say, “I'm going to learn how to surf or I'm going to learn how to cook local Indonesian food or I'm going to learn the language.” Those kinds of projects I think are really useful for the slow travel concept. And they're a unique opportunity because if you’re a tourist, you don’t have time to set up a business or to learn the language and that’s the unique opportunity for the slow traveler.

There’s expat; people that have left their native country.

An expat is a person who lives and works in another country. Notice the following:

It is one of the downsides of being a tourist.

A downside is a negative quality about something. Notice the following:

That's sort of the turning point with a lot of people

The turning point is a time when people have noticeable change in their life. Notice the following:

It's not such a big deal anymore.

A big deal is something people put a lot of importance in. Notice the following:

Capital is a form of wealth or resources. Notice the following:

It helps me to get engaged.

Here, to get engaged means to become interested and committed to something. Notice the following:

#1324
Would you rather work for a large or small company?

#1322 The Recovery
An accident that ruined a special day.
INT 6
Aimee / Paul