Yoko is answers questions about Japanese tradition and festivals. 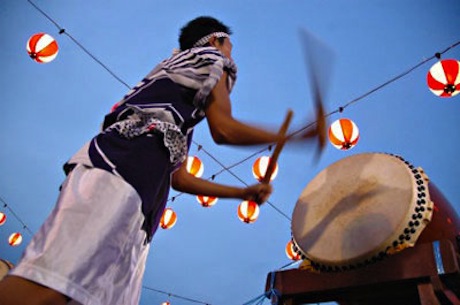 Todd: OK, Yoko we were just at a festival.

Todd: Do you want to talk about festivals in Japan?

Yoko: Yes, OK. So, I think in Fall we have lots of kind of festivals, but it depends on the places.

Todd: What are some things that most festivals have, like, what can you see if you go to a Japanese festival?

Yoko: Yes. Do you know the word?

Todd: I think so. What is Omikoshi?

Yoko: Ah, it's really difficult for me to explain in English, but Omokishi looks like a bigbox, lots of people, adult people try to carry together, and they usually go to temples, and they kind of celebrate a harvest or our happiness or those kind of things

Todd: OK. Do you ever carry the Omikoshi?

Todd: OK. What about foods? What kind of foods do people like to eat?

Yoko: We can see lots of small shops along the street and we can buy really Japanese food, like watagashi, it's a really sweet candy but it looks like, how do you say that?

Yoko: Yeah. Sorry. You should see it. So it's watagashi or watame. It's really popular food in matsuri, and we can see okonomiyaki. Yeah, it's, somepeople say Japanese pancake, or something, but tastes different.

Yoko: It's not sweet.

Todd: It's not sweet.

Yoko: It's not sweet. So vegetables, meat, and some sauce.

Yoko: Yeah, I think so too. You should try it.

We were just at a festival in Japan.


A 'festival' is a kind of celebration that usually has food, music, performances and maybe things for sale. Notice the following:


It's like a big box that adult people try to carry together.


'Adult people' is just another way of saying 'adults' or people that are older than children. Notice the following:


They kind of celebrate a harvest or happiness or those kind of things.


We use 'kind of' when the answer or description we are giving is not exact. Notice the following:


When you 'like' to do something you enjoy it or it gives you pleasure. Notice the following:

sounds good or try it


That sounds good; i think I should try it too.


If something 'sounds good' it seems like a good idea. If we taste or do something for the first time we are 'trying it.'  Notice the following:

festival • adult people • kind of
like • sounds good • try it