Nicola has a twin brother. She talks about him and their similarities and differences. 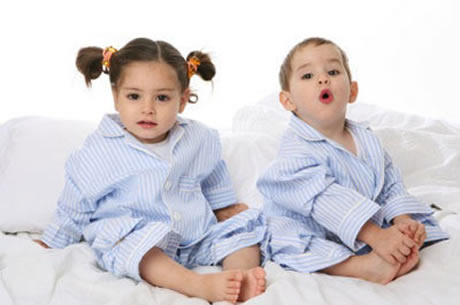 OK, my twin brother. Well, my twin brother is called Daniel, and he is four minutes younger than me. We were both born on the 5th of January, and I think that we kind of look alike except that he's a lot taller than me and he has very dark hair but we have the same eyes and nose and smile, at least that's what people say.

I wouldn't say we are especially close, not really, maybe when we were younger but we weren't always in the same classes at school because my parents wanted us to be a bit more different. We used to be dressed when we were babies the same, me in pink and him in blue, and we used to have a birthday cake that was always, half was pink and half was blue, and mine had ballet slippers on it and his a football or a rugby ball, but I guess we are quite different personalities. He's really, really outgoing, and just very different from me. At school I was always in the top classes getting A's and he was always failing in the bottom classes, but he was really sporty and I wasn't so people said we were very different.

I think that we kind of look alike.

At lest that’s what people say

My parents wanted us to be a bit more different

I wouldn’t say we are especially close.

The phrase ‘I wouldn’t say’ shows that the speaker do not completely agree with something. It is very similar to the phrase ‘I don’t think’. Notice the following.

The adjective outgoing, means friendly and likes being with and talking to people.  Notice the following:

I would not say we are especially close.

When people are ‘not especially close’ that means they have a relationship, but it is not nearly as strong as other relationships. Notice the following:

alike • at least • would not
outgoing • especially
Answer these questions about the interview.

200 Tacos
Anna talks about how she like to make tacos.
﻿
INT 4
Norman

197 The Commute
Todd gives his thoughts about taking the train to work every day.
﻿
INT 5
Nicola

196 Twins
Nicola has a twin brother. She talks about him and their similarities and differences.