Anna talks about how she like to make tacos. 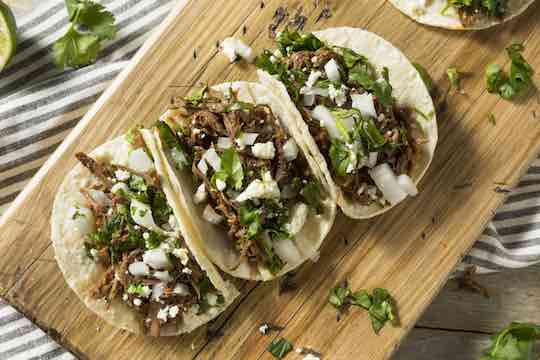 Todd: OK, now Anna, you were saying that your favorite food is tacos.

Todd: OK, and how do you make tacos?

Anna: They're pretty easy. All you do is you buy some meat like ground beef, or ground turkey, and you cook it in a skillet until it's finished. You can add some chopped onion, or any spices, like cumin or chili powder and then you just serve the meat on tortillas or taco shell with cheese, tomato, lettuce, onion, guacamole, or anything. They're delicious.

Todd: Sounds pretty good. So what do you put the meat in? Does the meat have to go on a tortilla or something?

Anna: Yeah, on the tortilla.

Anna: And you can add on top.

Todd: OK, what kind of tortillas do you use, flour or corn?

Anna: I like corn, but my husband John, he likes flour. We make both.

you were saying that

Anna, you were saying that your favorite food is tacos.

The phrase 'you were saying that' is a reference often used to discuss something spoken earlier.  Notice the following:

The word 'pretty' can be a adverb of intensity to mean slightly or fairly.  Notice the following:

You buy some meat like ground beef, or ground turkey

Here, ground is the adjective form of the verb 'grind' which means to cut something up into small pieces.  Notice the following:

You cook it in a skillet until it's finished.

A skillet is a thick iron pan.  Notice the following:

Then you just serve the meat on tortillas or taco shell.

A tortilla is a flat pancake like bread made of flour used in Mexican dishes.   Notice the following:

200 Tacos
Anna talks about how she like to make tacos.
﻿
INT 4
Norman

197 The Commute
Todd gives his thoughts about taking the train to work every day.
﻿
INT 5
Nicola

196 Twins
Nicola has a twin brother. She talks about him and their similarities and differences.