Alex talks about things students do for fun at university in the U. S. 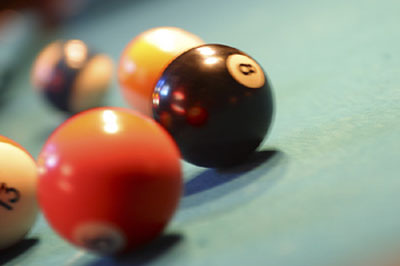 Todd: So, Alex, you're still at university.

Todd: So, what's a typical day at university like?

Alex: A typical day at my school, let's see, well I would usually get up, well last semester, I would get up around 8 or so. My first class would be at 9:10. It'd be an hour so around 10:10 I'd get out of class, you know, have lunch, and I was actually a part of the college radio station

Alex: So yeah, I'd hang out there, play some music, you know, joke around, play some pool, go to class. It wasn't too bad.

Todd: Yeah, where do you play pool?

Alex: Oh, well, anyplace that I can really. There's a pool table right next to my radio station at school so I usually play a lot there - a place called Mr. Pockets, too, where I live. They're pretty inexpensive so, I play there too, but I'm not very good. Like the pool table at my college was, it was a bar pool table so you have to pay money for it, 50 cents a game, and I must have put at least a hundred dollars in there and I'm not any better than when I started out, so I don't know.

Todd: That's OK you have other talents.

Todd: What's the allure of pool? Why do college kids like to play pool?

Alex: Oh, I have, it's really a mystery, it's very ambiguous. I don't know. It's just the pool tables there and something with hitting balls with a stick into little holes, maybe, but it's a lot of fun. I don't know why I like it as much as I do but even though I'm not so good I like to play some pool.

A 'typical day' is a normal or usual day when nothing special happens. Notice the following:

I was part of the college radio station, and I'd usually hang out there.

When you 'hang out' in a place you spend your time there even in you have nothing that you are working on. Notice the following:

We play music, joke around, play some pool, and go to class.

When you 'joke around' with people you make jokes or light conversation with each other. Notice the following:

What's the allure of pool?

The 'allure' of something is what makes it interesting to us. Notice the following:

'Pool' is another word for billiard.  It is a game played with many hard, heavy balls on a big fuzzy table.  You try to hit the balls off one another into pockets or holes on the side of the table. Notice the following:

219 African Safari
Ashley talks about a safari she went on in Africa.
﻿
INT 4
Shawn

217 College Pasttimes
Alex talks about things students do for fun at university in the U. S.
﻿
BEG 3
Sophie