Ashley talks about a safari she went on in Africa. 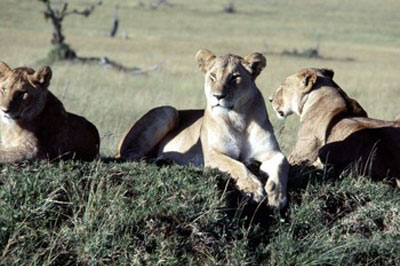 Jessica: Ashley, when you went to Kenya did you do a safari?

Ashley: Yes, it was incredible. Uh, we went of a five day safari. We were up every morning at 4:30 in the morning, um, to watch the animals and then we would have all day to kind of sit back and do nothing and then we'd go on another animal drive in the evening because that's when the animals are eating, so cause it's so hot in the day that they come out at dawn and dusk to graze. It was incredible.

When we first started out, we weren't even in the national park, we were on our way to the park, and we saw some zebras and we were screaming at our safari driver,"Stop! Stop! There's zebras! There's Zebras!" And he's like, "Uh!", he's like,"You'll be sick of zebras by the end" and we were so sure, like there was no way, we will never be sick of zebras. We will never be sick of zebras animals, it's just, it's just to foreign, to incredible to us, but by the end we were like,"Uh, another zebra" No, I'm kidding, I mean still, it was incredible. We saw just lions and the whole thing, giraffes. Uh, to see giraffes run. Their necks, are just this wave. It's beautiful, so beautiful.

Jessica: So were you most impressed with the giraffe or?

Ashley: No, probably the lions. I mean, their the king. Just, we saw thirty different lions. It was, it was something out of a fairly tale. It was incredible. We even saw, we didn't see them make a kill but we saw them eating a kill, which was quite disgusting, but it was incredible to watch because there was a male lion who was, I guess he had already eaten cause you know the men eat first and then they let their families eat, but there was another male, we were trying to figure out the dynamic of it because he wouldn't, the one male was keeping the other one away and keeping him away so his cubs could eat and they were kind of fighting, growling, I mean we were only ten feet away from them, not even that, like five feet. We were right there. It smelled cause it was a dead, I don't know, buffalo. It was gross. But it was incredible.

We went on a five-day safari.

We use '# -day' to describe how long something will happen for. Notice the following:

When you are 'up' you are awake. Notice the following:

We would have all day to kind of sit back and do nothing.

Used like this 'sit back' is very similar to relax and do nothing. Notice the following:

One male lion was keeping another away, so his cubs could eat.

When you 'keep something away' you do not allow it to come close to you or other people or things. Notice the following:

It was gross, because they were eating a dead buffalo.

'Gross' is an informal word for disgusting or something that makes us feel sick in our stomach. Notice the following:

219 African Safari
Ashley talks about a safari she went on in Africa.
﻿
INT 4
Shawn

217 College Pasttimes
Alex talks about things students do for fun at university in the U. S.
﻿
BEG 3
Sophie