Steve talks about the government in Canada. 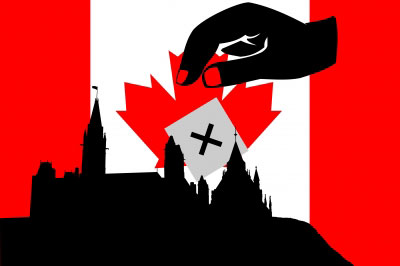 Steve: Sure. Basically in Canada there are 10 provences and three territories. We call the three territories, territories because they have less than 50,000 people living in them. They're really far north, where it is cold and obviously not so comfortable to live.

The other ten provences are British Columbia, Alberta, Saskatchewan, Manitoba, Ontario, Quebec, New Foundland, Nova Scotia, New Brunswick and Prince Edward Island. Each Provence has their provincial government but as far as federal government the capital is in Ottawa, and there's actually an election coming up, probably sometime this year. Each province is given seats in the federal cabinet and seats are given based on population so Ontario and Quebec which have the largest populations have the most seats in Federal Parliament and so wherever you live you basically vote for the politician who is running in your particular geographical area, and the political party which wins the most seats forms the government that rules the country.

Todd: OK, and the leader of the country comes from that party?

Steve: Yeah, the leader of the country is elected within the party. They elect the leader (OK) So each party, when they want a leader, they have a leadership convention, and they elect a leader to lead that party, but the leader of the party must also run in their own constituency or riding, so if they don't win they can't be the Prime Minister, so, yeah, the main political parties, right now the government is Liberal Government. Other prominent parties are the New Democratic Party, sometimes called the NDP, and the New Conservative Party. Also a powerful party is Bloc Quebecois, which has most of its seats obviously in Quebec, so there are four main political parties.

How does the Canadian political system work?

A 'political system' is the framework for how politics work in a country.  Notice the following:

In Canada, there are ten provinces and three territories.

In this case a 'territory' is a place that is owned by Canada and part of the Canadian continent, but does not have enough people to be considered a state. Notice the following:

There's an election coming up sometime this year.

If something is 'coming up' it will happen in the near future. Notice the following:

win the most seats

The party that wins the most seats becomes the ruling party.

A 'seat' refers to a representative within the Federal Parliament.  So the example is saying that whichever political party has the most representatives in the House of Commons is the ruling party. Notice the following:

The leader of the party must also run in their own constituency or riding.

A 'riding' is an geographical location, such as a city, that has representation in the House of Commons in Canada. Notice the following: