Shawn talks about his favorite sport. 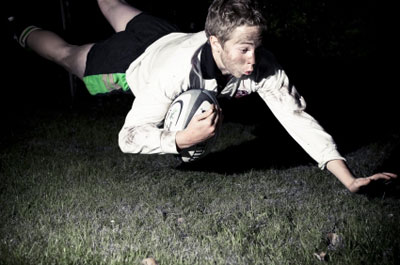 Todd: Do you play rugby?

Shawn: I did in the past.

Todd: OK, how does rugby work?

Shawn: You have to be extremely strong, but at the same time, you have to have, wha-chu-call, an extreme line on stamina to play this sport. Without stamina, you can not continue in this sport.

Todd: OK, just some people may not know, what is stamina?

Shawn: You have to be able to run for 80 minutes in the game. Besides the game rugby has a bit of it's own culture. A bit of a cult in the world. It's a very small following but people do follow it, follow it very devoutly, very seriously, and it, how-should-I-say, I can honsestly say rugby has been a big part in changing me into the person that I am presently.

Shawn: Sort of, how I can develop my leadership skills, my social skills, and how to work as a team player, in such a, how-should-I-say, in that time when you do play rugby, it's so aggressive, and it teaches you how to be a leader in tight situations, and it shows how you can truly push yourself to the limit, and not go, how-should-I-say, not go over the limit.

A 'physically demanding' sport is one that requires a lot of strength and endurance. Notice the following:

Without stamina, you cannot continue in this sport.

'Stamina' is endurance or the ability to do something that is physically difficult or tiring for a long time. Notice the following:

Rugby has a small following, but people follow it devoutly.

In this case, 'following' is a group of people or fans that are interested in something and want to know all the current updates.  To 'follow something devoutly' means to pay very close attention to any changes or news. To anything 'devoutly' means to do it seriously and with great dedication. Notice the following:

Playing rugby teaches you how to be a leader in tight situations.

In this case 'tight situation' refers to a situation that is very fast-paced or stressful. Notice the following:

push to the limit

It shows how you can truly push yourself to the limit.

When you 'push yourself to the limit' you perform an action to the limits of your ability or to the point where you can't do any more. Notice the following: