Lois talks about football from a fan's perspective. 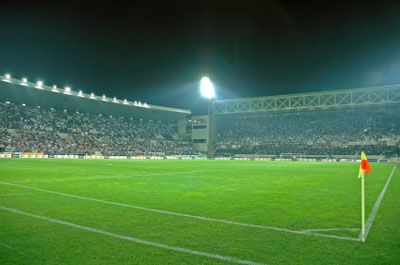 Todd: So, Lois have you ever been to a professional football match in England?

Lois: Yes, I have. I support a team called Leicester city, and when I used to be at university I used to live in Leicester. I used to go to quite a few of their matches.

Todd: OK, so what's it like when you go to a professional game?

Lois: So first of all, the fans are all separated, because in England there's sometimes violence at football, so they like to keep the fans away from each other, and there's always a lot of police there, but I've never been at a match where there's been any trouble, so that's been OK. Um, the atmosphere is normally amazing because the smallest grounds hold about 20,000 people, so you get quite a good crowd, and because their stadiums are quite small, you're quite close to the pitch, so my team weren't very good though, so often my team would lose, so it wasn't so good, but when they one it was fantastic. Really, really good atmosphere and lots of fun.

Todd: That's cool. So how much does it cost to get it?

Lois: See again, it's quite expensive so maybe now for the lower teams it probably, cheapest ticket is 25 pounds, but for example if you wanted to go and see Manchester United play, play then maybe 50 pounds or more, but it's really really difficult to get tickets for Manchester United because everybody has a season ticket, so if you want to go and watch them you have to know somebody who can get you a ticket. It's difficult to just buy a ticket for those games.

Lois: I think there a good team. I think that the reason a lot of people don't like them is because they used to win all the time, so now they don't win so much, because now Arsenal win most of the time. So I think they're a good team, but I don't think you can like them if you're not from Manchester.

Lois: No. If you were an American you would probably pronounce it Lie-Se-Ster, so it's spelled L-E-I-C-E-S-T-E-R.

Todd: Wow, that's quite a handful. Alright, thanks, Lois.

Have you ever been to a professional football match?

A 'professional match' is a game where you watch two professional teams play against each other.  Notice the following:

The atmosphere is normally amazing.

When used like this 'atmosphere' refers to the general emotional feeling of a place. Notice the following:

close to the pitch

Because their stadiums are quite small, you're quite close to the pitch.

The 'pitch' is the field or ground where the players play.  If you are 'close to' something there is a not a great distance between you and the other thing. Notice the following:

It's really difficult to get a ticket, because everybody has a season ticket.

A 'season ticket' means you buy a ticket to all the games played on the home field. Notice the following:

That's quite a handful how you spelled it.

If something or somebody is difficult or complicated with can say they are 'quite a handful.' Notice the following: