Norman talks about a time he lived in Europe. 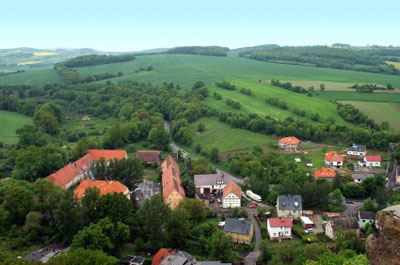 Todd: Now Norman, you've lived in Japan for awhile. Have you lived in any other countries?

Norman: In Germany, yes! This was for the Canadian Armed forces. The, usually it's the man the father, who's there as a soldier, but sometimes it's the woman. But they have, they do have children and there was a need for some Canadian schooling. They hire teachers to teach the children of military personnel.

Todd: Wow! What a cool job! What did you think about Germany?

Norman: Germany is very interesting in that it's a very lively country, I find. I enjoyed certainly the nature part. Every weekend, Susan and I tried to go on what they call volksmarch, which means, it's, "volks" means popular, popular walk. You have a choice of five kilometers, ten kilometers, or fifteen kilometers walk and at the end, once you complete the walk, you get a metal, and the walk is always in some nice
village. You go up the hills, up the mountains, you have beautiful sights, and every now and then they have some kind of a food stand with a Bavarian band playing, and then you have those Bavarian sausages and it's just a whole lot of fun so we would take our children along with us and it would be quite an event.

Todd: That's nice. How long did you live in Germany?

Todd: Wow, so you speak German as well.

Norman: I do, I do, but now I have not spoken it for quite a long time so it would take a little bit of, let's say, review.

I had two contracts in Germany, and I lived there for five years.

I worked as an immersion teacher for children of military personnel.

An English 'immersion teacher' would teach English to non-native speakers by using only English.  All of the classes and resources are in English. Notice the following:

They have some kind of food stand with a band playing.

A 'food stand' is place that serves a few types of food in a very informal environment.  There are usually food stands at fairs and festivals. Notice the following:

We would take our children with us and it would be quite an event.

If something is 'quite an event' it is very exciting.  We usually use this to refer to a party or celebration. Notice the following:

You speak English, French, and German - you're tri-lingual!

When you speak three languages fluently you can say that you are 'tri-lingual.' Notice the following: