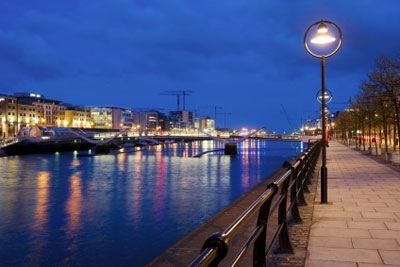 Marion: So you lived in Dublin for awhile, didn't you Mauve? What's life like in Dublin?

Mauve: I think life in Dublin is very different from everywhere else in the country. It's the biggest city in Ireland. It's got a population of about a million I think, even though the population of Ireland is only 4 million,
so most people...

Marion: So it's a quarter of the whole population.

Mauve: Exactly. It's a very young population, I think, the Dublin population, I suppose like all cities there's plenty to do, in terms of cinemas, theatres, I don't know, you know whatever else, comedy club and all that kind of, plenty of night clubs, loads of restaurants. It's very international now, at the moment I suppose, like there's Japanese restaurants, and well there's always Indian and Chinese, and there's like, I don't know, French and Spanish, and every type of restaurant.

Marion: So it's kind of a cosmopolitan city.

Marion: Or big by Irish standards, I suppose. Yeah, it's probably like a village for other people.

Mauve: I know. Even though when I went to New York then, in June, it wasn't such a culture shock, cause even though, there are high rise buildings and every thing but it wasn't that different though. You know, I think that Dublin has come on a lot and it's by no means rural anymore, you know, in comparison to other cities in Ireland, like Cork and Gaul, we're very rural, but, I don't think Dublin is.

Marion: Yeah, I think Dublin is like an international city, and it can stand on it's own.

Mauve: Definitely, yeah, you can compare to London or, you know, New York.

Marion: And the standard of, like the cost of living, is very high in Dublin, though, isn't it.

Mauve: Yeah, it is. Rents are much higher there. It's more expensive to eat out and I suppose to do everything really. You need a good salary to live in Dublin I think.

Dublin is a city that has a very young population.

If a city has a 'young population' it means that most of the people in the city are children or younger adults.  The word 'population' refers to the people that live in a specific place. Notice the following:

Dublin is kind of a cosmopolitan city.

If a place is 'cosmopolitan' it has people and experiences from all over the world.  Notice the following:

It wasn't such a culture shock, even though there are high-rise buildings.

'High- rise buildings' are buildings with many floors or stories that stand very tall into the air. Notice the following:

Dublin is by no means rural anymore.

The phrase 'by no means' can easily replaced with 'not' or 'in no way' but we use this phrase for emphasis. Notice the following:

stand on its own

I think Dublin is a city that can stand on its own.

If something can 'stand on its own' it doesn't need help from anyone. It is independent, in this case, from other cities. Notice the following:

population • cosmopolitan • high-rise
by no means • on its own

250 Mexico
Adrienne talks about her stay in Mexico.
﻿
INT 5
Jessica

249 The Outfit
Jessica describes what she is wearing and where she bought it.
﻿
ADV 7
Travis

246 First Job
Lois talks about the first job she had and how much money she made.