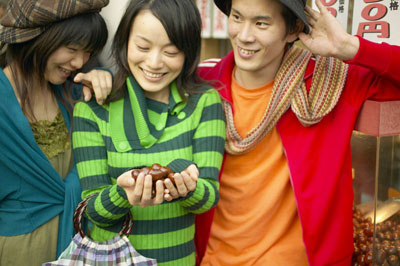 Todd: Kawabe, can you explain the difference, or compare, Tokyo and Osaka?

Kawabe: I'm just imagining. Maybe this is the wrong example, but um, you know, people are so friendly. This is what I want to say, and people, the relationship in Osaka between each, between, you know people, are so close, very very closer than Tokyo one and people are so friendly, you know, for example when buy something at the shop, where ever it is, someone's gonna talk to you. "Hey, where are you from? What do you want to buy? and this is better than this. You better take this one."

Kawabe: Yeah, in Tokyo nobody will tell you know this kind of thing in the shop, you know, it's a
weird thing in this big city.

Todd: That is strange. Why do you think people are different in Tokyo than Osaka? They're only,
you know, 500.

Kawabe: People don't care about each other in Tokyo. It's like New York City and, you know, there are too many people to deal with, to, you know, so in Osaka it's a big city but it's always, it's also, at the same times like a huge village.

Kawabe: And in Tokyo, nobody speaks with a dialect but in Osaka everybody speaks the same language, I mean that Osaka dialect. That is why I think they are feeling the same kind of
tie. Some kind of ...!

Kawabe: Yeah, with each other, so and we call it Osaka-ben in Japanese, Osaka's dialect, and that way of talking is always like very funny, always like sometimes noisy, but it's lovely dialect. You know, everybody likes it, so the most of the famous comedian in Japan, on every kind of, any kind of TV show are from Osaka. In Japan, most of the famous comedians are always from Osaka. Yeah, so, it's a big difference. The, OK, simply, character in Tokyo is cold, the people are cool, you know, stay cool. You don't show your emotion very much. You've got to be very, very, like, decent, square, and you've got to act cool. This is what you have to be in Tokyo, but in Osaka, you just, you know, anything goes. You can do whatever you want to do. You can be whoever you want to be and then, you know, people are wild and free and cheerful, lovely and it looks like they are enjoying the life, like an Italian, like Italian, yes! I think this is a good example. It's like Moscow and Venezia, or Moscow and Napoli or, you know, North Korea, Pyongyang and Rome. It's like this.

Kawabe: People are so different.

It's a big city but it's also at the same time like a huge village.

A 'village' is smaller than a town and has a friendly feel to it.

In Tokyo, nobody speaks with a dialect but in Osaka everybody speaks the same language, I mean that Osaka dialect.

A 'dialect' is the certain way that people from a particular area speak. Each regional dialect will have its own special features such as vocabulary or phrases.

That is why I think they are feeling the same kind of tie.

A 'tie' is something that binds two or more things together. In this case it refers to a connection between people.

You don't show your emotion very much.

To 'show emotion' means to display your feelings for everyone to see. You can show emotion with your facial expression or you actions.

In this case, 'square' means that you are well rounded person. Usually a square person refers to someone who very intelligent, but not very good with social interaction.

361 Food
Eli talks about her love of food.