Lisa talks about three drinks and their health benefits. 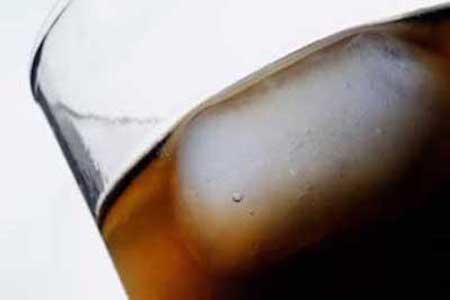 Adrienne: So, Lisa, what is that you're drinking?

Adrienne: Is it your favorite drink?

Lisa: It's not really my favorite drink. My favorite drink is Diet Coke. I love Diet Coke, but a couple of years ago, I was drinking only Diet Coke and started to realize that that probably was not the healthiest thing for me to be drinking, so I switched to oolong tea.

Adrienne: What are the benefits?

Lisa: So there is a couple of benefits. One benefit which I really like is that it absorbs fat, or when you're eating foods that are high in fat and drinking it with oolong for some reason it absorbs some of the fat, so there have been studies that prove that oolong tea does contribute to weight loss, and that's why if you go to a lot of Chinese restaurants they'll always serve tea with the meal and most likely it's oolong tea cause for some reason it absorbs fat, plus oolong tea also has anti-oxidants, which are cancer fighting and makes it so much healthier, so it fights fat and cancer.

Adrienne: So now you only drink oolong tea?

Lisa: Well, in my research on the most healthiest drink, I also found that green tea was even healthier than oolong tea, so now I drink oolong tea, green tea, and always a bit of diet coke.

Adrienne: So what are the benefits of green tea?

Lisa: Green tea, also, I think it has more anti-oxidants. They did a study of green tea and found that people who drink green tea lost more weight than people who weren't drinking green tea, so anything that either absorbs fat and contributes to weight loss is a drink for me.

Adrienne: OK, but I thought green tea had a lot of caffeine in it, so I thought actually that green tea was maybe is not the best tea to be drinking.

Adrienne: Very interesting. I learned a lot from you today.

699 How Not To Get Lost
Greg gives advice on getting around in a foreign place.
﻿
INT 5
Lisa

696 Family Traits
Adrienne talks about the different personalities in her family.