Abiedemi talks about how people prefer to watch movies in her country. 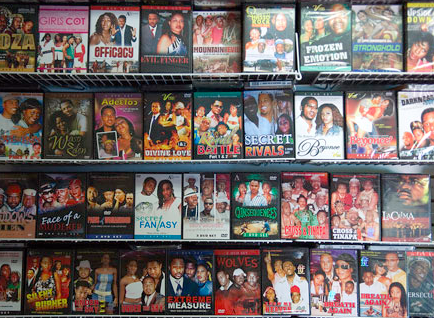 Todd: So, how do people see these movies? I mean are there movie theaters or is it mainly straight to video or what’s the main way?

Abidemi: Most of it is actually straight to video like you said because now internet and computers are everywhere. So a lot of these movies are produced by companies around in big cities and then they’re sold to local sellers. And because buying DVDs is so cheap, anybody can get them. And through ... they put a lot of posters out when a movie comes out, the producers or the movie company, they put a lot of posters out so everyone knows it’s out. And if it’s something that’s really good, through word of mouth very quickly, everyone knows that, “Oh my gosh, have you seen this movie, have you seen so and so movie?” One movie that came out maybe six ... this is a little old but this was Jennifer, it’s what the movie was called, and it hadn’t been out say a month or two, the whole country knew about this movie and if you were anybody you had seen it, so things like that. So usually through DVDs you buy one, you like it, you recommend it to your friend. If you don’t have it anymore, if it’s scratched they go buy one and everyone, quickly everyone sees it.

Todd: Wow! So word of mouth?

Abidemi: Word of mouth, I would say.

Todd: So is this movie industry really big for the whole continent or is it just pretty much just, you know, a Nigerian following?

Abidemi: I would actually say, it’s big for not just Nigerians. There are lots of Nigerians in the [0:01:35.3], in England, in America, in other countries so those people they hear about the movies from reading the internet and they watch on the internet or they buy it when they go home to Nigeria. Other countries, I mentioned earlier that a lot of Nigerian artists are collaborating with artists from Ghana and other neighboring countries. So through that too, a lot of Ghanaians watch Nigerian movies and vice versa. There are Jamaicans who watch Nigerian movies because there’s an element to it, it just ... at the beginning, you may not like it but the more you watch of them, they becomes ... they grow on you, so to speak, that you just get sucked in, so I’ve heard of people they watch and there are so many of them, you could watch one a day for a whole year and not be done because they just keep producing them, producing them, producing them, so they have a huge following all over, mainly West Africa and for Nigerians in other parts of the world they watch them. And I’ve heard of some South Africans watching them as well, so probably over the continent. But Nollywood specifically is known all over the world.

Abidemi: So first time, when you want to get started, I would say Google or check YouTube for Jennifer. It’s an interesting movie about a girl that goes from the village, so I think it shows Nigerian history, human relationships and also our values. It’s about a girl that goes from the village by chance, she’s able to go to a top university and she completely changes. Instead of keeping her family value of humility, she starts chasing rich men and like her friends that she meets in the big city, just to get more money, so she focuses less on her studies and more on getting money. But unfortunately she chases the wrong people, she gets AIDS and that leads to her downfall. So these movies, although they’re very high in entertainment value they also have very good educational lessons or messages behind them too. So I would definitely recommend, Jennifer to start off with.

Todd: Oh, I’d definitely check it out. Thanks.

It spreads through word of mouth very quickly.

When something spreads word-of-mouth, people learn about it by talking to people. Notice the following:

Have you seen so and so movie?

The term 'so and so' refers to the name of a thing or person the speaker cannot remember. Notice the following:

A lot of Nigerian artists are collaborating with artists from Ghana.

When you collaborate, you work together with people to accomplish something. Notice the following:

In the beginning you may not like it, but it grows on you.

When something grows on you, you do not like it at first, but it becomes more likeable over time. Notice the following:

You just get sucked in.

When you get sucked in to something, you become highly interested in something, even though it was not your intention. Notice the following:

lead to her down fall

That leads to her downfall.

Something that leads to your downfall is something that starts a series of bad outcomes. Notice the following:

word of mouth • grow on you • collaborate
downfall • so and so

1257 Traveling to Taiwan
Hana talks about a trip she took to Taiwan.
﻿
INT 5
Chris Adelina

1256 Belgium Education
Chris talks about the education in Belgium.