Curtis and Spencer talk about their fashion style and the clothes they like to buy and wear. 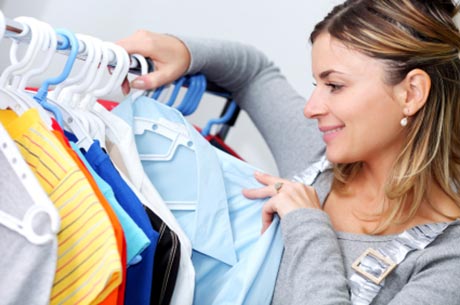 Spencer: So talking about clothes, Curtis, do you spent a lot of money on clothes?

Curtis: I don't really spend a lot of money on clothes. I think the clothes that I buy last for a long time. And I have a lot of them but I only add to them very slowly over the years. Some of my t-shirts I've had since high school. And so even dress shirts for work, every once in a while something will get worn out but not very often. So I have a lot of clothes but I don't have to spend much money on them. I would like to maybe this year or next year buy a nice three piece suit though, that might be a little bit expensive, but I've always wanted one of those.

Spencer: Yeah. I'm the same, I don't like to spend a lot of money on clothes, but every now and then it is nice to splurge on something that looks really good, yeah. No, there's some great shops like TJ Maxx and Target and yeah, they're, you know, half price and not as expensive. But you can still find some great looking things.

Curtis: Right. Yeah. And I think by adding to the collection that I already have, I can wear different styles on different days. And so I don't feel like I need to spend a lot of money to replace my whole collection because of that, like you said, you can splurge and maybe spend a little bit more on a really nice item that you want because you're able to keep recycling everything else that you have already.

Curtis: Do you think you have too many clothes by chance, do you feel like you need to get rid of any of your clothes?

Spencer: Right now I have way too many shoes actually. I kind of feel like I have a pair of sneakers that I use for sports and tennis, I have a pair of like nice cute shoes that I wear for when I when go out and dress up and then I have a pair of kind of everyday flipflops that I walk around in all the time. But there's three other only things I need but in my closet right now I have about like probably 12 pairs of shoes and it's ridiculous like you know I don't need exactly three pairs of black shoes, one that's heels, one that's not, one that's sandals. So I have way too many shoes for one. Shirts, I have maybe too many t-shirts, they tend to accumulate, if you go to certain events a lot of times you'll get free t-shirts. I run in a lot of marathons and one of the things they give you is a t-shirt. So they've kind of accumulated and I have a lot, a lot of t-shirts. What about you?

Curtis: Yeah, I think I have some shirts that I need to get rid of, a few t-shirts that are from events that don't really look so nice. I never wear them but I have them, I always feel like, oh, just in case, maybe if I haven't done laundry for a while I'll need a t-shirt some day. But they take up a lot of space in my drawers. So I think I need to get rid of some of those. And as far as shirts for work, I have a few shirts that I first bought just when I started working after college, and they're nice shirts but I tend to select other shirts before them so they never really get worn. So what I've decided to do is turn all of the hangers around on my ... where I have my hangers for my dress shirts. And after six months anything that hasn't been turned forward, which means I've worn it at least once, if I haven't worn it in six months I can probably get rid of it.

Curtis: That way I can monitor myself and see what I'm wearing or what I'm not, and if I'm not wearing then I can donate it to a shop or give it a way or send it to a recycle shop or Salvation Army or something like that.

Spencer: I have a terrible habit of when I find something that fits me well and I think looks good, I'll buy several of the same thing, just in different colors, so I'm wearing the same thing all the time just with different colors. Yeah, I love hats, I tend to wear a hat whenever I go outside in the summer, when I play tennis, when I go to the beach, all the time. And they get so worn, I need more of them.

Curtis: Yeah, I have a few hats. I don't wear them very often, for me a hat is like a last ditch effort to save a bad hair day, like I woke up late, I have to go or I'll miss the bus, okay here's a hat.

Spencer: I do that all the time. Oh, I don't have enough time to shower this morning, just throw on a hat.

Spencer: Nobody will ever know, yeah, it's good.

They get worn out.

To wear out is to become damaged over time. Notice the following:

It is nice to splurge on something that looks really good.

To splurge on something is to spend a lot of money to buy it. Notice the following:

I need to get rid of a few t-shirts.

To get rid of somethings means to be free of it or have it no longer. Notice the following:

They never really get worn.

To get worn is when clothes are put on. Notice the following:

A hat is like a last ditch effort to save a bad hair day.

A last ditch effort is one last try to do something. Notice the following:

1300 Shopping for Clothes
Curtis and Spencer talk about the clothes.
﻿
INT 5
Spencer Curtis