Michael talks about the most famous animals in South Africa and which one is the most dangerous. 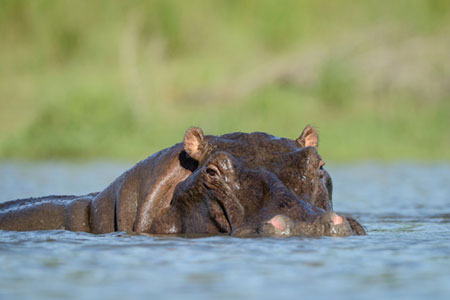 Ana: I heard that South Africa is famous for its wild animals.

Mike: That's true. We have many different kinds of animals in South Africa. Have you heard of the big five?

Ana: I think so but I don't remember what it is.

Mike: So the big five are the animals that foreign tourists like to come and see in South Africa. And there are safaris and trips you can go on to wildlife reserves to see these animals.

Ana: So what are they?

Mike: Yes, that's one of them.

Mike: No. The giraffe is definitely a big animal but it's not one of the big five. The other three are rhinoceros, the – is it the water buffalo, I think. And the final one is – what is the final one?

Ana: Is it the cheetah?

Ana: Okay, and have you seen all of these animals?

Mike: Let me think. It's been a while since I visited a wildlife reserve but I've seen elephants before. And let's see; I've seen a lion. I don't think I've ever seen a cheetah. I've seen a rhinoceros from far away.

Ana: I've heard they're quite dangerous.

Mike: I don't think that there are not many of them in the wild. I don't know if there are any in the wild. They're all in wildlife enclosures so that actually I don't think many people are injured or killed by rhinoceroses. But actually, do you know what the most dangerous animal is in Africa?

Ana: Is it the lion?

Mike: No, it's not. It's the hippopotamus.

Mike: I think they killed more people every year in the world than any other animal.

Mike: Maybe mosquitoes kill more with malaria but in terms of big animals, it's definitely the hippopotamus.

Mike: They have very long teeth as well.

Mike: Yeah. It is pretty scary. You don't want to be – you know, they can swim as well. So they would – and if you go out on the river in a little bit on a dam and there's a hippopotamus, he can tip your boat over and bite you in half.

Ana: All right. So you should definitely look out for hippos when you go to South Africa.

Mike: Yeah. You should be careful. Crocodiles can also be nasty.

You can go on to wildlife reserves to see these animals.

A wildlife reserve is protected land for wild animals. Notice the following:

They're all in wildlife enclosures.

An enclosure is an area with a wall or fence around it. Notice the following:

He can tip your boat over.

When something tips over, it turns over. Notice the following:

Bite you in half

When something is cut in half, it is split into two pieces. Notice the following:

Crocodiles can also be nasty.

Nasty means not nice. For animals it can mean dangerous. Notice the following:

reserve • enclosure • in half
tip over • nasty

Video 1314
Are there any wild animals where you live?
INT 4
Valeria

Video 1313
Is there wildlife in your area?

#1311 Choosing a Climate
Aimee and Paul discuss the best place to live.