Sarah talks about a very interesting job she had in the mountains and some animals in the area.

John: So Sarah, you talked about competing in a rodeo. Have you done any other sports on horseback?

Sarah: Yeah. Well, not a sport. I used to have a job, and my job was to take people on horseback into the mountains in Wyoming. And it was a really fun job.
Everyday, we would saddle up, maybe 15 or 20 horses. And then we would take beginners, people who had never ridden horses before, and we'd show them how to lead the horses and get on the horses. And then, we'd go up into the mountains for two hours or four hours or sometimes all day.

John: That was your job? 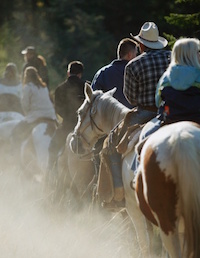 Sarah: And the horses were really good. And to be honest, the horses mostly ignored the people on their backs.

Sarah: The horses, they knew the path that we were taking.

Sarah: And sometimes, people would want to do something that's dangerous like go too fast or go a different way. And the horses would ignore the people and go the way they're supposed to.

John: What about wild animals? You're out going on horseback trail rides through the mountains, right?

Sarah: Yeah. And the area we went through was famous for elk. We saw lots of elk. And, you know, where there's elk, there are also the animals that eat elk. So there were mountain lions and bears.

John: Oh, that's a good one. Did the visitors like that joke?

Sarah: They did. They thought it was really funny until I pointed out which horse was the slowest, and then that person got really nervous.

John: Did you ever see a mountain lion?

Sarah: I never saw a mountain lion. But one time, the horses were all acting really nervous and they wouldn't go forward. And I didn't know why they were acting this way.

Sarah: They refused. And so, I ended up turning around and we went off the trail, and we had to make a big circle.

Sarah: And then, later, I found out that there had been a warning, that there were mountain lions in the area. And so, I think that's why the horses refused to go.

Sarah: Yeah. Sometimes in the morning, when we are the first people on the trail, I would see tracks, like wolf tracks or cougar tracks. But I never saw the real animal.

John: That's probably lucky. Sounds like you had a really fun time at that job.

Sarah: Yeah. It was really fun and we were outdoors everyday. That was my favorite part. The air was so clean and I loved working with the animals and being in the sunshine. It was great.

A saddle is a seat people use on a horse. When you saddle up a horse, you put a saddle on it so people can ride the horse. Notice the following:

Is my horse going to fall down the cliff?

A cliff is a steep rock face. It is hard to climb and can be dangerous. Notice the following:

The horses ignored the people.

When you ignore someone, you do not listen or pay attention to them: Notice the following:

That place is famous for elk.

There were mountain lions and bears.

Mountain lions are large cat-like animals in North and South America that are dangerous but rarely seen. Notice the following:

On the trail, I see tracks.

Here, tracks are animal footprints of where an animal was walking. Notice the following:

Video 1382
Do you like spending time outdoors?
INT 4
Adam

Video 1381
Are rodeos cruel to animals?