Aimee and Todd talk about all the stuff they have in their homes. 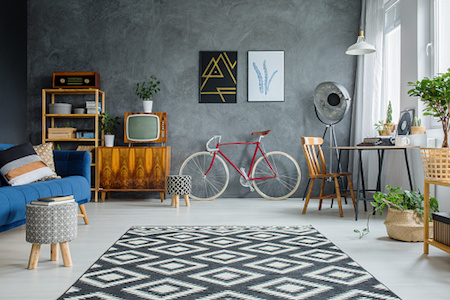 Aimee: How many rooms are in your house?

Todd: My house has four rooms, a living room, a sleeping room, a study room, and a kitchen.

Aimee: That sounds big. How about bathrooms? How many bathrooms do you have?

Todd: I have two bathrooms or toilets, and then I have one washing room to take a shower.

Todd: I do have a TV in the living room, and I have a big couch and a nice table, and I have cable TV.

Todd: I have cable, but I don't watch TV much.

Aimee: Oh, well, what about your kitchen. Do you have a kitchen?

Todd: I do. I have a very small kitchen. My kitchen has one stove, a small stove, a table, and a refrigerator, and a microwave. I can cook, but it's not easy.

Aimee: Oh, how many chairs do you have in the kitchen.

Todd: We only have two chairs. It's very, very small.

Aimee: Do you have a kettle?

Todd: I do have a kettle. Do you want coffee?

Aimee: No. It's an important, important kitchen appliance.

Todd: It is. It is. I like that kettle. I think, in American English, we say "Coffee pot."

Aimee: For me, a kettle is something you use to boil water, so you could be making tea or coffee.

Aimee: How about books, Todd? Do you have many books?

Todd: No. I have a rule. I only keep two books.

Todd: Only two. Never three. I don't like having three, four-

Aimee: hat is so strict.

Todd: It is. It is very strict. My rule, strange rule.

Aimee: How about clothes? Do you have a lot of clothes?

Todd: No. I am a minimalist. That means I have few items of clothing. I think I have maybe five shirts and three pairs of pants-

Todd: And two pairs of shoes.

Aimee: In your house, do you have a patio?

Singular vs Plural Nouns with Articles

2-01 Be Verbs
Aimee and Todd talk about their favorite things.
﻿
BEG 2
Katie Todd

2-05 Adverbs of Frequency
Daniel and Hana discuss eating out.