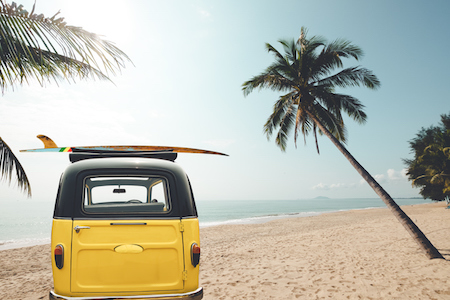 Todd: So Darcy, let's talk about our dream life. Where would you like to live?

Darcy: I want to live by the beach.

Todd: That would be nice.

Darcy: Yes, I want to live somewhere that I can see nature and hear the ocean waves. I want to be able to go outside and just get away from things.

Darcy: How about you?

Todd: Well, I love the beach and I like to go to the beach a lot, but I'd like to live in the mountains. I want to live in a forest or around a lot of trees. I love trees and I like to go hiking so I want to live where it's very rural, but not far from the city and I can go hiking a lot. I want to have a dog because if I have a dog, I can take the dog walking with me. That would be really nice.

Darcy: I want to live somewhere that's kind of suburban, close to a city but quiet but also, I want to have a home that has a yard and I don't need a fence but I would like to be nearby neighbors and where people are friendly, instead of kind of too tight together or too spread apart.

Todd: Right. What about transportation? Any type of car? What type of car would you like to have?

Darcy: I think I would like to have a chauffeur.

Todd: A driver? You'd like to have a driver?

Darcy: Because I don't have my license yet.

Darcy: I want to get a license. I want to learn how to drive but if I can't, it would be convenient if I would have a chauffeur to drive me around.

Darcy: What about you? How do you like getting around?

Darcy: Yeah, I don't have a car license, but I have a scooter license, so I want to get a nicer scooter that's like pink and white, and I would like it to have lights underneath the bottom, something shiny, and I want it to have a stereo and I play music while I drive down the streets.

Todd: Oh, no. Do you want people to hear your music when you go by?

Darcy: I just want to hear my music when I'm driving.

Todd: Okay, so how about travel? So, where would you like to go?

Darcy: What about you? Where would you like to go?

Darcy: It sounds like you just want to travel around the world.

Todd: I do kind of, but I like teaching. Actually, that leads us to the next question, what is your dream job or what would you like to do as a professional? I'll go first. I want to teach English in South America. I'd like to teach English in maybe Chile or Argentina or maybe Brazil or Colombia. I have friends that taught in those places, and they all say it's really nice.

Darcy: Yeah, I just want to be a teacher or something with teaching, or I want to do some type of mentoring. I like traveling too, so I would like to go to maybe Korea or France or Italy, some European country, because I want to go somewhere new and have a new experience, but I'm also interested in the mentoring, so I think it would be really great. I really want to do TED Talks, so I want to get more experience so that way I have something that I can share with other people and travel around the world and talk to different people.

Darcy: I want to learn how to play the guitar.

Todd: That would be lovely.

Darcy: Yeah, I really like writing poetry so I think it would be cool if I learned how to play my own music. I want to be able to sing and play guitar and perform and entertain people and I want to kind of form that connection that music does that we can't necessarily do just talking with each other.

Todd: Yeah, that's a nice one.

Darcy: What about you? Do you have any skills you want to learn?

7 Present Perfect - Experiences
What cultures have you become familiar with?
﻿
INT 4
Meg Todd

8 Modals of Obligation
See what Meg has to do.
﻿
INT 4
Sarah Todd

9 Present Continuous - Future
What are you doing this weekend?
﻿
INT 4
Sarah Todd

10 Zero Conditional
When you are sad or sick, what do you do?