Marion and Todd discuss the various sports they like to watch on TV. 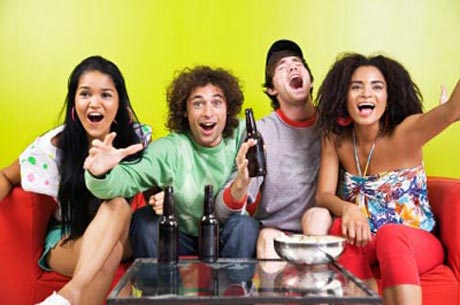 Todd: So, Marion, do you like to play sports?

Marion: I don't play sports at the moment cause I don't really have the time, or it feels like I don't have time. It's been a long time since I did sports regularly.

Todd: Yeah, me too, but I love sports. I love to watch sports on TV.

Marion: Mm-hm. But that's not really taking part in sports is it? It's not the same. That just means that you like TV.

Marion: OK, so, what kind of sports do you like watching on TV?

Marion: But of course. Anything else?

Todd: No anything, pretty much basketball, baseball. I watch anything but there are sports I really dislike.

Marion: The girls doing their pirouettes and stuff like that?

Marion: Figure skating, is that what you mean?

Todd: Yeah, yeah, so when you watch it you think, they're gonna fall, they're gonna fall, and they've got the music on in the background, and they're going around really fast, and then maybe you like one of the skaters, and then you're nervous cause you think, she's gonna fall, or he's gonna fall. I mean they're terrific athletes, but to me that's not a sport, that's an art. It should be like dancing or ballet. Like they don't put ballet on the sports network, so they should not put ice-skating on the sports network either.

Marion: OK, I see where you're coming from, but I think if you watch a race like say the 100 meters, or something like that, you might also be nervous and afraid that one of them is going to fall, if you have that kind of investment in somebody.

Todd: Yeah, I don't think so, and I mean maybe it's just me but, yeah!

Marion: If you've got and American runner, which you usually do, in the 100 meters, do you not feel really nervous for them?

Todd: No, cause I know they're gonna win. No just kidding! Actually, they haven't been winning recently, but, yeah, I guess a little bit, maybe the hurdles. You fell that way about the hurdles, a little bit.

Marion: Um, I don't mind, but I do find it a bit boring after awhile, really.

Marion: I find, to be honest I find most sports boring to watch after a certain length of time. An hour and a half is about my limit. I like watching soccer, but soccer is always changing so, I don't find that a chore to watch but everything else really, an hour and a half and I'm done.

I hate ice-skating. It's torture.

We use the phrase 'it's torture' to talk about an activity we really hate.  Notice the following:

They've got the music on in the background.

Background music plays softly and is not the focus of a situation.  We hear it while watching a movie or in a department store.  Notice the following:

I see where you're coming from

I see where you're coming from, but I disagree with you.

The phrase 'I see where you're coming from' means that we understand the opinion of the speaker.  Notice the following:

an investment in someone

I am nervous one of the skaters will fall if I have an investment in them.

We have an investment in someone or something we care very much about.  Notice the following:

I don't find soccer a chore to watch.

A chore is an activity we don't like or is very difficult to do.  Notice the following:

Complete the sentences with the words below.
torture • background • coming from
investment • chore