Have you been in a natural disaster?

Six people share their experiences with dealing with bad weather and disasters.

I was in a typhoon in Hong Kong, and I just arrived with a big heavy backpack, and I had to hide in a telephone box while the street flooded and the water came up around me.

Natural disaster? No, I haven't been been in a natural disaster. Unfortunately I was very close to a bomb which went off in Manchester when I was about sixteen years old, which was quite scary, but probably not as scary as a tsunami or a typhoon or something.

Oh, yes, yes. I have been in a natural disaster. I forget what year but Hurricane Yuniki in Hawaii, but I lived on Ohau so we got the eye of the hurricane so it wasn't like harsh at all. In fact, I remember when it hit, I remember telling my parents, I wanted to go out and fly a kite because it looked so nice outside, so it wasn't really that bad of an experience for me.

Yes, I have. I've been in a fire. A really big one actually. It was just very scary. There was just smoke everywhere, and I couldn't see anything. My eyes were hurting. I was choking, and I really thought I was going to die, but I was rescued by an old man passing by.

OK, have I been in a natural disaster? Well, I've actually seen one happen while I was driving, and this was along I think the coast. I think it's called the Pacific Ocean Highway, if I'm not wrong. Anyway, there was in December 2004 I think, it was ... there was a big landslide during a the raining season in Los Angeles, and while I was driving I actually saw it, and then I didn't know what was damaged, but it was all over the news, and then it was bad.

Yeah, actually, I was staying with friends in Norway and we were camping and we got hit by a blizzard and it was really frightening, but luckily I was with some big Viking Norwegian guys, and they knew exactly what to do, because I didn't. It was really ... you couldn't see anything. It was so white and the snow was so heavy and it actually hurt quite a lot, and it didn't help that it was absolutely freezing.

Learn Vocabulary from the Lessons

A bomb went off.

When a bomb 'goes off' it explodes. The phrase is used usually to refer to something with a timer. Notice the following samples:

eye of the hurricane

We got the eye of the hurricane.

A hurricane is a very violent storm, like a typhoon. In the center is it very calm and this is called the eye of the hurricane. Notice the following:

When you 'choke' you cannot breathe. You can choke on food, smoke or because something is very tight around your neck. Notice the following:

all over the news

It was all over the news.

When something is 'all over the news' it takes up a large portion of the news, and it is in all media forms: newspaper, TV news, internet, etc. Notice the following.

It didn't help that is was absolutely freezing.

The phrase 'it didn't help that ... ' is used when talking about a bad experience and something that adds an extra negative aspect to it. Notice the following:

Below are some more great lessons!

Mixer 85 Big or Small Biz?
Is it better to work for a small or large company?

Mixer 84 Favorite Gadget
We ask people what their favorite gadget.

Mixer 83 Free Education
We ask some people if university should be free.

Mixer 82 Cars and the Future
Will people still be driving cars in 100 years?

Mixer 81 Business Idea
People discuss a business they would like to own. 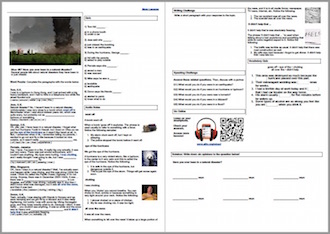 Complete the sentences with the words below.
goes off • eye of the • choking
all over the • didn't help