Rob talks about his construction job and building homes. 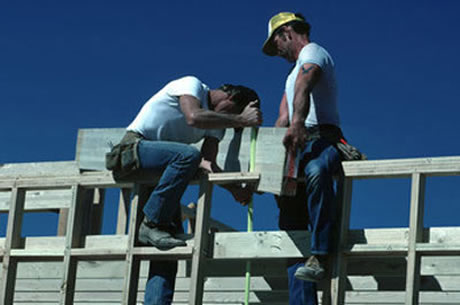 Todd: Rob, when you first came to Japan you said you did construction.

Rob: Yes, I was hired as a framer for 2x4 types of homes, so the same style of homes that are built in Canada or America.

Todd: OK, so what do you mean by frames?

Rob: Framing, the actually frame of the house so, we start from the foundation, we lay down the sub-floor, we build the walls, a second floor, more walls, square everything up, and then add in the windows, the exterior wrap, and on some occasions we will finish the roof.

Todd: How long does it take you to make a house?

Rob: Our job would take around two to three weeks, with three guys, a team of three, we were able to frame a house, shingle the roof, install the windows and the doors in less than three weeks.

Todd: Oh, wow. Now when you work, do you work with a Canadian crew or Japanese?

Rob: Actually, it was quite mixed. Our boss was from Seattle, Washington, and we had people from Canada, New Zealand, Australia, and some Japanese workers.

Todd: Wow, that's cool. What it a good experience?

Rob: Yeah, it was a very good experience. I hope one day maybe to be able to build my own house with some friends. It's possible to save money and it's the enjoyment of building something for yourself.

Todd: OK, where would you build this house?

Rob: That's a good question. I'm thinking, maybe back in Canada, but maybe not in the East Coast. It'd be possibly in B.C. or maybe in another country. Who knows?

Answer these questions about the interview.
Learn vocabulary from the Lesson

We start from the foundation.

The "foundation" of something is a strong base or support that is used so the building will not move.  Notice the following:

To "square something up" is to make it straight and in order, the way that it should be.  Not to one side or the other.  Notice the following:

We shingle the roof.

A "shingle" is a thin piece of strong material that is used with many other shingles to cover and protect a house.  Shingle can also be used as a verb.  Notice the following:

We install the windows and the doors.

To "install" something is to put it in place so that it works properly.  We use this for things are parts that are not moved from the place they are originally put.  Notice the following:

The crew was quite mixed, people from Canada, Australia.