Nicola talks about a time her brother was in a bad accident. 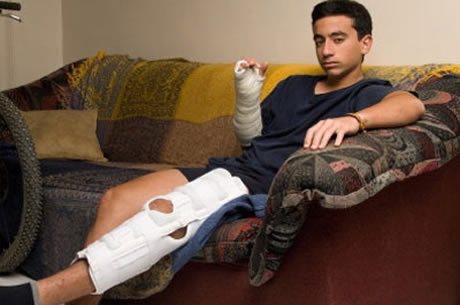 So, a funny story then about my brother. First of all, he's my twin brother, so he's the same age as me, 26, and when we were, I think, 8 years old, it was during the summer. It was a very, very hot day, so all the windows in the house were open, and we decided to play hide and seek, so my brother, Daniel, he goes upstairs and he sits by the window, on the window ledge, and he's waiting for us to come and find him, so he leans back, but not realizing the window's open he falls out of the window, so he falls about 15 feet and he break both of his arms and all we hear is this screaming and we think, ah you know, he's just kidding around and them my mom goes out and sees that he's lying on the floor, one bone sticking out of one arm, the other one's all twisted, so we call the ambulance and everyone's crying. My mom is being sick with the shock, and he goes to hospital. We were really, really worried, you know, is he going to die, or whatever, and he was fine. He broke both his arms but he was in hospital for about two weeks I think. Yeah, it was really nasty. He's got a horrible scar now.

We decided to play hide and seek.

'Hide and seek' is a game for children where one person hides and the other person tries to find him.  Notice the following:

A 'window ledge' is the bottom edge of the window that sticks out a little from a house.  Notice the following:

To 'lean back' is to move the upper part of your body back and down, or to begin to recline.  Notice the following:

The accident was really nasty.

'Nasty' is word that can mean 'terrible' or 'disgusting.'  Notice the following:

He's got a horrible scar now.

If you have a really bad cut or burn on your skin there will be a mark after it heals, that mark is a 'scar.'  Notice the following: