Anna talks about an unusual gift she gave for Valentines's Day. 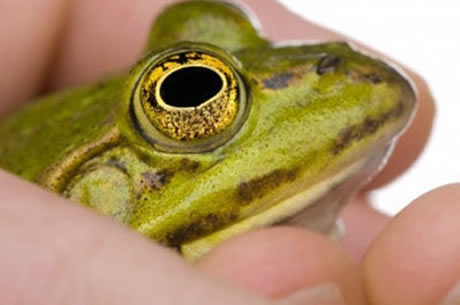 Todd: OK, Now, Anna, you were telling a cute story about a special gift you gave your husband.

Anna: Yes. Well, our first Valentine's day, I wanted to give John a very unique gift. So I remembered that he used to have an iguana, so I thought he liked reptiles, and I found a cute Pac Man Frog at the pet store and actually one of my students told me about Pac Man Frogs and I thought, "Oh, that's so cute!" and so I bought the frog for John and I surprised him with it. And I made him close his eyes and I brought the frog out and the look on John's face was so funny. He was so terrified because he didn't like reptiles. I was wrong.

Anna: Yeah, so he had to keep the frog for maybe one year. And he didn't like it. He thought it smelled bad, and the worst thing was the frog had to eat baby mice, so once a week John had to go to the pet store and buy a baby mouse and feed it to the frog, so!

Anna: Yeah, it ate once a week, it ate a mouse.

Todd: How much did it weigh?

Anna: Maybe 8 ounces. I don't know. It was big. It could sit in your hand. It was the same size as your hand. Yeah, it was really big.

Anna: Yeah, Pac Man, cause it looks like the Pac Man character.

He used to have an iguana.

The phrase 'used to' refers to things people did before, but do not do anymore. Notice the following:

make him close his eyes

I made him close his eyes.

Here, the verb 'make' is a causative verb. It shows that someone causes another person to do something. Notice the following:

the look on his face

The look on John's face was so funny.

Here, 'the look on his face' refers to the persons facial expression at the time. Notice the following:

He had to keep the frog for maybe one year.

The verb phrase 'have to' means must. It is more common in spoken English. Notice the following:

the worst thing was

The worst thing was the frog had to eat baby miice.

The phrase 'the worst thing' or ' the best thing' are commonly used to highlight good and bad points. Notice the following:

used • make • have
worst • look
Answer these questions about the interview.