Todd talks about the best things about his home city of San Francisco. 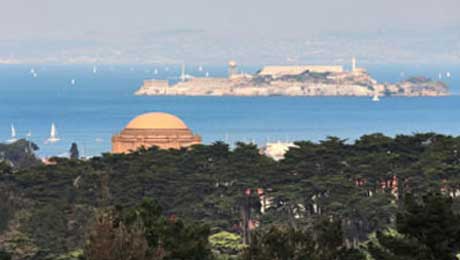 Todd: So what about the good things about your city?

Todd: The good things about San Francisco. Well, first I think it's probably America's most multicultural city. So it has a really large Asian population, and a really large Latino population. So when you go to the city it's really mixed. There's not one type of people that look like they're San Franciscans. So you get a nice variety of cultures and people, which is kind of nice.

Lia: What about... so you said that there are a lot of multicultural communities, so, they respect each other, how they're...

Todd: Yeah, actually, yeah, San Francisco I think is a good example of everybody pretty much getting along. So there really isn't any, I would say, divisions between the cultures. I think there is in other cities, but San Francisco doesn't seem to have it. You know, I think it's just because everybody's so busy working, and because it's kind of an even balance that maybe that's one of the reasons why.

Lia: Anything else, any other good sides of your city?

Todd: Well I think one is San Francisco has amazing architecture. We have some of the best architecture probably in the U.S. We have many landmark buildings, Coit Tower, Transamerica Tower, Golden Gate Bridge. So, that's one thing.

And besides the architecture I would say, just the nature. So... San Francisco is quite near nature, and there's lots of places that you can get to within 30, 40 minutes of the city center. For example you can get to Muir Woods in about 30 minutes. It's this beautiful, beautiful forest, and it's just amazing, like when you go in the forest, it is just nature at its most perfect form, and that's only 30, 40 minutes from the city, so it's really nice.

Lia: Wow, seems really beautiful. I would love to go there.

Todd: Oh you should go. For anybody going to America, I definitely recommend San Francisco.

Lia: Well, any other good things? What about the food?

Todd: The food is really good. Like other cities, like New York, because we have so many cultures, you can get pretty much any type of food in the world. Even like all different types of African food, and South American food, Asian food of course, European food, so yeah. But it's a little expensive because the city is, like I said, it's expensive.

Todd: If you get a chance, you should go.

Lia: Yeah, I would love to. Okay, thank you very much.