Jeremy talks about the difficulty of taking care of a baby while taking a long flight.

Abidemi: So Jeremy, you mentioned earlier that you’ve been back to Canada with your baby. How was that experience?

Jeremy: Well, I mean, until you fly with a toddler, you really never get to appreciate all of those times that you flew across the ocean, you know, watching movies or reading magazines or just sleeping on the flight because those days are over.

Jeremy: I mean, it’s not that bad but when you’re on the plane, you say, “Never again.” I remember about halfway into a 10-hour trans-Pacific flight, I thought, “Well, I can maybe do this every three years but not more than once a year for sure.”

I mean, first of all, our boy was bigger than most children for his age. So he was about one year old. And, you know, they have these bassinets that you’re allowed to put your child in and, you know, the baby will hopefully sleep for a while. So the stewardess sets up the bassinet, we’re all ready to put him in there and then she says, “How old is he?” And he was 12 kilos, and this was for 11.5 maximum.

Jeremy: And they wouldn’t let us put him in there, so they had to take the whole thing apart and basically, we had to find some way to have him sleep on our laps for the next nine hours.

Jeremy: I mean, you know, one-year old like to crawl around. They like to scream, they like to cry. Other people on the flight don’t like that so much. So, you know, it’s basically every minute of silence you just savor and just pray that this will keep going, and it never does. 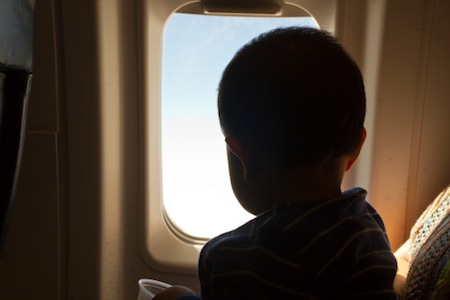 But, you know, once he falls asleep and the plane is quiet and they turn off the lights then, you know, it’s okay. But it’s too long. It’s too long for a one-year old. So I can maybe manage it once a year but that’s about it.

Abidemi: I remember my sister, she has two kids and she told me a story a few years back when one of her daughters was still a toddler, and they went to Disneyland from Canada. And she said it was just horrible, and they would never do it again.

And I just smiled. I didn’t have that experience. I was just thinking, “What could be so bad about it?” But hearing your story now, wow, I can only imagine.

Jeremy: Well, I think that – actually most people, most passengers on the flight are usually quite understanding. And I think it’s just, you know, in the parents’ head that everybody is judging them, everybody is looking at them. Because, you know, I get so worried about what other people are thinking, that inconveniencing others that I just work myself up so much, and my wife is the same way.

But, you know, talking – actually, we did have people say to us like, “Don’t worry about it.” They will just go out of their way to say, “Oh, what a cute baby” and stuff like that. So I think people were kind of aware of how stressful it is for parents.

And they just – some people actually make an effort to make parents feel like everybody is not silently judging them or maybe not even silently.

Abidemi: Okay. Not saying anything. If you had an advice, one advice to give to a parent that would travel with that child in the future, what would you tell them?

Jeremy: My best advice is if you can fly in the morning. So after baby wakes up and you have your breakfast and your flight is maybe at, I don’t know, 9:00 or 10:00 in the morning, I think that works out if it’s a, say, a 10-hour flight because you’ll land it’ll be probably around bedtime, like his normal bedtime.

The first time we did it, the flight was in the late evening. So basically, he’d been up all day. And then there was another 10 hours on top of that. So, you know, when we landed, the readjustment to his normal schedule was really, really difficult. But when we flew in the morning and it was a 10-hour flight, when we landed, he just basically went to sleep like a normal schedule.

So that’s a small thing but it really makes a big difference.

Those days are over

Because those days are over.

Here, the phrase 'those days are over' means a part of your life will never happen again. Notice the following:

They have these bassinets that you’re allowed to put your child in.

A bassinet is a small bed for babies. Notice the following:

They had to take the whole thing apart

Here, take the whole thing apart means you dismantle something.

When you crawl around like babies do, you move with your hands and knees.

Most passengers on the flight are usually quite understanding.

It’s just in the parents’ head.

When a thought is 'in your head', that means you worry about it, and perhaps more than necessary.

Everybody is judging them.

When you judge people, you make opinions about them, often negatively.

over • crawl • take apart
understanding • in your head • judge

Video 1356
What annoys you when traveling?
INT 4
Mark / Sorie

Video 1355
Would you like to have a big family?

1360 His Life in Japan
Warren talks habits he started in Japan.
﻿
INT 6
Antoinete-Warren

1359 Her Life in Japan
Antoinette talks about habits in Japan.
﻿
INT 6
Katia / Felipe