Katie talks about the biggest singing competition on the planet and why she loves it so much. 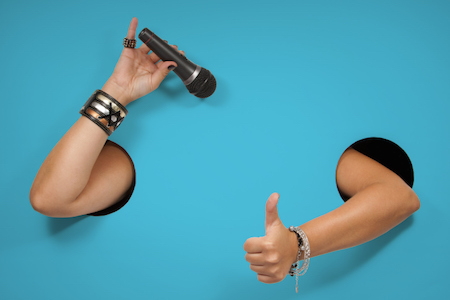 Aimee: Hey, Katie, did you hear that Australia are rejoining the Eurovision Song Contest?

Aimee: So can you tell us a little bit about Eurovision? What is it exactly?

Katie: Eurovision is basically a music competition that happens every year in May. And countries from all over Europe have an entry in the competition.

Aimee: And it's Euro…

Katie: Eurovision, and yeah, every single country in Europe send somebody to sing in the competition.

Aimee: And where is it usually hosted?

Katie: It's hosted in the country of the previous year's winner.

Aimee: Right. So this year then, do you know where it was?

Katie: I don't remember who won it last year, but the previous year, two years ago, it was won by someone from Austria.

Katie: So last year, the competition was in Austria.

Aimee: Right. That sounds like a wonderful event for the hosting country.

Katie: Yeah. And I'm from the UK, and the UK hasn't won it in such a long time. And I really, really want to win because I wanted to go and see a live Eurovision competition.

Aimee: Right. So over the – you mentioned that you're such a big fan. Over the Eurovision history, do you have any personal highlights?

Katie: Probably my favorite entry was from ages and ages ago, before I was even born by an English entry called Bucks Fizz.

Katie: They were really awesome. They were singing a great song, and then suddenly, halfway through the song, the boys ripped the girls' skirt off.

Katie: Not that way. But they were wearing a long dress and then they were suddenly wearing a skirt. And it was amazing.

Aimee: They kind of costume changed then.

Katie: Yeah. And at that time, it was probably the most exciting entry in Eurovision ever.

Aimee: And how was the song?

Aimee: Okay. So I take it, they didn't win then?

Katie: I don't think so.

Katie: I don't, I don't know. I can't remember. Also, I remember the costumes but not if they won or not.

Aimee: Yeah. Not the song.

Aimee: Costumes, too are important.

Eurovision is basically a music competition that happens every year in May.

A competition is a contest or game that people do to determine a winner. Notice the following:

It is a huge, continental competition.

Something this is continental includes all parts of a continent, like Europe or Africa. Notice the following:

It's hosted in the country of the previous year's winner.

Previous refers to something that happened before. Notice the following:

Something that is a real shock is a big surprise. Notice the following:

I remember the costumes but not if they won or not.

A costume is a set of clothing people wear when acting or performing to be someone other than themselves. Notice the following:

Here are some more great lessons!

Video 1413
Are talent shows popular in your country?