Abidemi talks about living in the northern part of Canada. 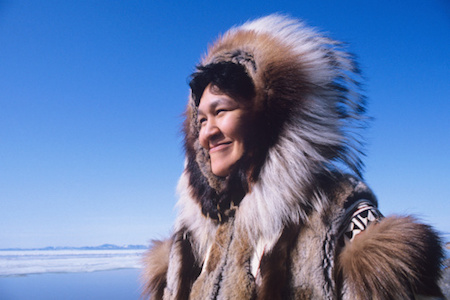 Todd: So Abidemi, you were a teacher in Canada. correct?

Todd: Now, where did you teach?

Abidemi: I taught in Northern Canada in a province called Nunavut.

Todd: Nunavut. Wow is it like a native Americans type ..?

Abidemi: Yeah, and except we call them Inuits.

Abidemi: I really liked it. It was great. Very different from other parts of Canada. Very cold obviously because it's in the far north, and the communities are very isolated. Very few people live there. In the particular community were I lived, there were about a thousand people, maybe less living there. So everything has to be shipped in, or flown in by ship that comes in the summer when the oceans melt, and then in the winter, they usually fly them in, so food was quite expensive, housing expensive. Yeah, it was a different experience for me.

Abidemi: Life happens, and it's interesting how similar it is to what we have down south in Southern Canada, the other parts of Canada. Like they have TVs and similar housing, but you do have to be careful when using water because the infrastructure is a little different. The ground is frozen, so they don't have indoor plumbing. They have plumbing but they don't have running water. The water has to be brought to each house almost every day and sewage also has to be taken away, so you have to be careful how you use water. That's one part. Also, you don't get access to all the things that you want to buy. Sometimes you go to the supermarket, and maybe all the bread is gone, or the milk has not been flown in yet, so you have to be patient with that as well, and you don't get the same variety of products as you would get in larger places, so yeah, and as winter ... As you get more and more into the winter months, it gets darker earlier, so maybe around four o'clock in the afternoon it's already dark outside, and by the time you go to work in the mornings too, when you're going around seven, eight o'clock, it's dark outside, so you're like ... it's dark a lot.

Todd: Wow, what was it like being in an environment where you had so little sunlight?

Abidemi: It was hard, but I kind of feel like, I'm used to it. I took vitamin D tablets to help with that. So, yeah, but because I was working for the most part, I didn't feel like it was too hard, and then during the holidays, I would come back down south to my family, so I wasn't there too much during downtimes. I did spend part of Christmas vacation there, and that was nice. They had a lot of activities outside for community members: ice sculpturing, winter games on the ice, Inuit games, different things like that. So it was fun. It was really an experience that was culturally enlightening. If I could say that for me. I really enjoyed it. I really, really enjoyed it, though there were challenges as well. The isolation and the fact that if you wanted to go to other places that weren't in the community, you had to fly out, so it's very expensive to go there.

Abidemi: Yes, I loved it and I would like to do it again someday.

So everything has to be shipped in.

Shipped in means delivered by ship. Notice the following:

Everything has to be flown in.

Flown in means delivered by plane. Notice the following:

This phrase just means that people experience life no matter what the situation, good or bad. Notice the following:

They don't have indoor plumbing.

Plumbing concerns the transportation of water in buildings and cites. Notice the following:

I would come back down south

The terms down south, up north and out west or out east means in the south, in the north, and in the west or in the east. Notice the following:

It was culturally enlightening.

plumbing • down • life happens
flown in • shipped in • enlightening

Video 1453
What is the best thing about your country?

1455 Out of Country
Pernais talks about Jamaica.
INT 4
Abidemi Todd

1453 Life Happens Up North
Working and living in the artic.
﻿
BEG 3
Aimee Todd