Mark talks about the process of being a full-time podcaster.

Haruka: Mark, you have a podcast, right?

Haruka: What's your podcast about?

Mark It's called Zen Sammich, but it's about Zen, but I also cast the net pretty wide. So I talk about a lot of different topics.

Mark: Well, I've had guests on there from MMA fighters. If you know what an MMA fighter is, mixed martial arts fighters to artists and musicians. I've had a famous photographer, pretty much any kind of career field you can imagine.

Haruka: Yeah. How many episodes have you done so far?

Haruka Is it hard work to produce one?

Mark: It's a lot more work than I thought. When I started the project of doing a podcast, I thought that it was going to be turning on a microphone and just recording people, talking, and that'd be it. But there is so much more to it from sound editing, video editing if I record the video of an interview, to marketing there. There's a lot more to it than I thought.

Haruka: How long have you been doing it?

Mark: I've been doing it for about seven months now.

Haruka: Seven months. All right. And what made you think, starting a podcast?

Mark: Well, originally I had a website that was a blog. I wrote articles or I would get some people I knew to write articles for it. And from that I thought, well, I would rather record a conversation than write an article and I enjoy listening to podcasts. So I thought, why not? So the blog turned into the podcast.

Haruka: So do you love it?

Mark: Yes. I mean, it's one of the most enjoyable things I've ever done as a personal project. Although, like I said before, it involves so much extra work. I don't love everything about it. I don't love marketing it, but I do love the creation part of it.

Haruka: Before becoming a podcaster. What were you doing?

Mark: Well, I used to be a lawyer and I also used to teach at a university.

Haruka: It's a multi-talented personality.

Mark: Well, I guess. I just didn't love those things as much as I do podcasting.

Haruka: So what other jobs have you done?

Mark: I've had lots of jobs over the years. I've worked in the restaurant business. I've worked for a plant nursery. I've worked at a hotel before, but my main career type jobs were being a lawyer or being a teacher. And I'm trying to turn podcasting into hopefully my final career.

Haruka: So the experience as lawyer and teacher helping podcast?

Mark: Actually yes. Being a teacher, because my podcast has a education element to it. I teach people about Zen. So I certainly use some of my previous teaching skills in terms of organizing my thoughts into what I'm going to say as a tool for how I create a podcast episode.

Haruka: If I wanted to start a podcasting, what advice would you give me?

Mark: To just do it. I think the starting part is the hardest for a number of reasons. One, people usually hate the sound of their own voice when they hear it recorded. Because it doesn't sound the same to them as it does in their head when they speak. Hearing your recorded voice, it always sounds funny to people. So you have to get used to that part, and it's a little nerve wracking at first. You're a little nervous the first time you try it, but eventually, you get over all that stuff.

Haruka: Do you interview people?

Mark: I do, almost 50/50. Half the time, I interview someone and the other half of the time, it's just me. I just do a solo podcast.

Haruka: For solo episode. How many hours would you spend to as a preparation?

Mark: Well, I mean, from start to finish, it's maybe ten hours on an episode, because then I'll prepare for an hour, recording it takes not just the amount of time of the episode, but I might have to record several times or rerecord, then I have to edit it and then of course I've got to do the marketing. So I'm just guessing, but maybe about ten hours for a single episode.

Listen to the Zensammich Podcast: 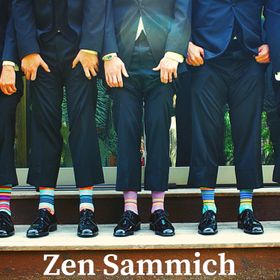 I also cast the net pretty wide. So I talk about a lot of different topics.

The phrase ‘to cast the net wide’ means that you include many different things or people.

The phrase 'cast a wide net' has the same meaning. Notice the following.

Here, the phrase 'that'd be it' means that the speaker did not expect more needed to be done, which was not the case. Notice the following:

there is more to it

But there is so much more to it

The phrase 'there is more to it' reveals that something is more complex than expected. Notice the following.

So the blog turned into the podcast.

The phrasal verb 'turn into' means to become something. Notice the following:

Although, like I said before, it involves so much extra work.

The phrase 'like I said' is used to refer to something the speaker previously said. Notice the following:

it's a little nerve wracking at first.

The phrase ‘nerve wracking’ means that you are extremely nervous or scared about something. Notice the following:

cast • that would • turned into
more to • wracking

1527 Zen Life
Mark talks about the art of being zen.
INT B2
Harukal Mark

1526 Becoming a Podcaster
Mark talks about being a podcaster.