Grammar Talks 4-01 Do for Emphasis

I do speak Spanish!

Two people share langaues they do and don't speak. 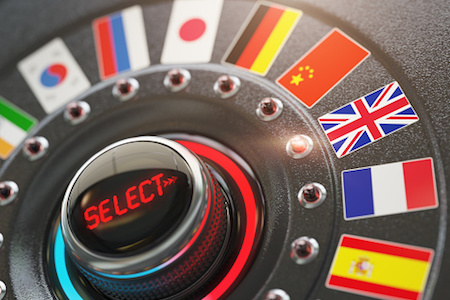 Todd: Sarah, you've taught in a bunch of different places. What countries have you taught again?

Sara: Quite a few. I've taught in Korea, Ecuador, Taiwan, Mexico, Japan, and the USA.

Todd: Oh wow. So you're a language teacher; you've taught in all these amazing countries.

Todd: So let's talk about the languages first. Do you speak Japanese?

Sara: I don't. I'm embarrassed. I've lived here six years, but I don't. How about you? Do you speak Japanese?

Todd: I do speak Japanese-

Todd: People don't hear me say it that much, because it's really bad, but I do speak Japanese. But it's bad. But what about the other languages? You lived in Korea. Did you study Korean?

Sara: I did. I did study Korean. And I did learn to read very well. But now, I've forgotten. So I can't speak it anymore.

Todd: I heard that it's relatively easy to learn the alphabet in Korea.

Sara: Yes, it is. It was invented by a scientist to be simple and easy to learn how to read.

Sara: So it is very easy.

Todd: What about China? Did you learn Chinese?

Sara: I didn't. I did study a lot. But, in the end, I found it too difficult. Do you speak Chinese?

Todd: I don't speak Chinese, but I lived in Thailand for five years.

Todd: And I do speak Thai, and I did study Thai when I was there. So, yeah.

Todd: And it's tonal, so it's similar, in some ways, to Chinese.

Sara: And can you read Thai?

Todd: I can read Thai.

Todd: Yeah, I do read Thai. So actually, my Thai reading is probably better than my Japanese.

Todd: Yeah. But it's hard, because in Thai the words kind of stick together.

Todd: Now, you were in Mexico and in Ecuador.

Todd: So do you speak Spanish?

Todd: And your husband was with you.

Todd: Does he speak Spanish?

Todd: And your children?

Sara: They do, too. They speak Spanish.

Todd: Oh, nice. And your children are with you now in Japan.

Todd: Do they speak Japanese?

Sara: They don't. They're learning very quickly. So I think they will improve, and in a couple of months, I can say that they can. But right now, their Japanese is very low.

Todd: So you were just in Mexico.

Todd: Do you miss Mexico?

Sara: I do miss Mexico. I miss the food the most. I miss the Spanish language. And I miss the music. How about you? Do you miss Thailand?

Todd: I do miss Thailand a little bit, but not too much, because I visit there a lot. So it's not that big of a deal. I go there usually once or twice a year.

Todd: But when I'm in Japan, I do miss it. I miss the food, especially.

Sara: I do miss living in the U.S. I often miss that I understand and I know the culture so well. Sometimes in Japan, I feel like an outsider. And so I do miss being in the USA, and being able to blend into the background. To be just another person.

Sara: How about you? Do you miss the USA?

Todd: No, I don't miss it at all. So I visit it ... I do miss my family, and I do miss some things, especially like the food and the nature. But I don't miss actually living in America. Maybe because I go back so often. So these days, it just doesn't seem like a big deal. Now, we are both in Japan. Do you plan to teach somewhere else soon?

Sara: I don't. I hope to stay in Japan for a couple of years. We are relaxed, we are settled, the children are in school. I hope we can stay here. How about you? Are you going to stay? Or do you have plans to go?

Todd: I do have plans to go, actually. And I want your old job.

Sara: You should do it!

Do / Does / Did for Emphasis

When we want to emphasis a statement we can use do, does, and did with stress to add meaning.

For negative sentences, extra stress is added to don't, doesn't and didn't to emphasis.

Point 1: In present simple sentences, you can use 'do' to show emphasis.

Point 2: If the subject is third person singular, then you use 'does' to show emphasis.

Point 3: If the action happens in the simple past tense, use 'did' to show emphasis.

Point 4: We can add 'do/does/did' and 'though' to a sentence to show contrast between two actions
Answer the following questions about the interview.