Life Way Back When

Life on the Farm 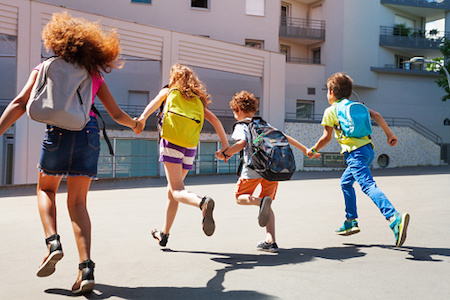 Todd: Rachael, we're talking about how life used to be different for us, when we were kids.

Todd: And, I was thinking the other day, it's interesting because we all have loving grandparents, or parents, but our parents used to do things that they can't do anymore. For example, we used to ride in the back of my grandfather's pickup truck ...

Todd: on the highway, which now is totally illegal, like it's a big no-no. We would get in the back of his truck and he would drive us all over the place in this old pickup truck. And like today, that's against the law, right?

Rachael: We used to have a station wagon. There are six kids in our family. We just all piled into the back of the station wagon. No seat belts, no car seats.

Rachael: Babies were in a little Moses basket on the back seat.

Todd: Yeah. And people used to do things like, also like you said, let kids run around the back of the station wagon or move around. You would strap things to your car and drive down the street. Sometimes you can't do that anymore, or you have to do it ... It's a little, bit more regulated than before I think, right?

Todd: Yeah. We also used to burn our trash, which is now a big no-no in California.

Rachael: We never used to do that.

Todd: Yeah. We had these big barrels. We would burn the trash. If you watch movies, you'll see in America, people burning stuff in barrels to stay warm or whatever.

Todd: Yeah. I remember one year, my grandfather was like, "We can't do it anymore. They sent a letter. They said no more."

Rachael: We used to go to the dump every week. My father would load up the trailer, well maybe every month or so.

Rachael: That's how we used to do it. We didn't used to burn it.

Rachael: I think they already had laws about it.

Todd: Really? You were probably ahead of the times. Yeah. Yeah, very green place. Also, for having children, women used to drink a little, bit, or they used to smoke when they were pregnant, right?

Rachael: Yes. That was a big thing, especially yeah, smoking to stay slim, while you were pregnant, so you wouldn't get too fat.

Rachael: That was why a lot of women smoked.

Rachael: It was a diet thing.

Todd: I did not know that. Wow, different times huh.

Rachael: Yeah and the baby was born smaller, but that wasn't considered necessarily a problem.

Rachael: It's illegal in New Zealand too. Yeah. Haven't seen.

Todd: Yeah, it's been a while, right?

Rachael: The magazines, newspapers used to be full of them.

Todd: Yeah. And they used to not have to say what all the ingredients were in foods and stuff, right? So these days you have to say exactly what's in the food, I think.

Rachael: Well, my mother and grandmother used to cook most things from scratch anyway. They weren't many packets or cans of anything ...

Rachael: No instant food or instant cake. They used to cook everything from fresh ingredients. We knew what was in stuff.

Todd: We did too. On our farm, my grandparents farm, they grew their own vegetables. We used to can them.

Rachael: Yes, we used to do that too.

Todd: Yeah. Although it was funny, because ...

Rachael: Vegetables and fruit, and potatoes every year.

Todd: Right. It's funny, cause you call it canning, but it's actually, you put it in a jar.

Rachael: You're doing it at home. You used jars.

Todd: You don't call it jarring, but actually I never remember putting it in a can.

Rachael: We called it preserving.

Todd: Preserving. Yeah. I hated that. We would do that all day for ... Usually all weekend and I dreaded that weekend.

Todd: That was the worst, cause you know ...

Rachael: I didn't mind it so much.

Rachael: Yeah. We kids, we didn't have to do too much. We used to like to pick the peels.

Rachael: Yeah, or the stones or we'd get lots of nice bits of fruit.

Todd: Oh, that's good. No. My grandparents put us to work. It was two days that I could not have fun, any fun from sun up to sun down. I dreaded it every year, like, "Oh no. It's canning weekend. Oh no."

Rachael: I didn't like having to go and take care of the potatoes.

Todd: So did your family have a potato ranch?

Rachael: We didn't have a farm, but we used to plant a potato patch at my uncle's farm.

Rachael: We used to have a vegetable garden at our house, the back yard of our home. We had apples and lemons and peaches and gooseberries and grapes.

Todd: Gooseberries. How do you spell it?

Todd: My poor pronunciation, listening there. Oh gooseberries. Oh cool. What do they taste like, gooseberries?

Rachael: Or, rhubarb if you've ever tried that and say that.

Todd: Rhubarb. I was not a fan of Rhubarb. Rhubarb was one of the things I dreaded as a kid, was the rhubarb pie.

Rachael: I loved it.

Rachael: I used to eat it raw out of the garden.

Rachael: We would play in the back and we had a trampoline. The vegetable garden was there. We used to pick the raw gooseberries or the raw rhubarb, beans or carrots. Afternoon snack was very healthy in those days.

Rachael: It's a vegetable.

Rachael: Not quite so healthy once you add cups and cups of sugar to it.

Rachael: The leaves are toxic. You have to be careful with it.

Todd: Yeah. They always make you eat it at ... Yeah. You'd have the canned cranberry whatever and also the beetroots. Those two things were not my favorites.

Rachael: I love beetroot on a hamburger.

Todd: Oh, well there you go. That's very healthy. It's purple. One of the few purple foods, right? Purple or reddish. Is it purple or red?

Todd: Kind of, a deep dark blood red, right? Yeah. Okay. Yeah, the good old days growing up on the farm. The things we used to do we can't do anymore.

Used to + base verb

Use the modal used to when talking about past events that no longer occur.

Point 1: We often use used to when asked about present activities.

(Q) Do you play any instruments?
(A) Not really. I used to play the guitar but not anymore.

Point 2: We often use the phrase not anymore to clarify that the action does not happen presently.

(Q) Do you see your friend from school?
(A) Not really. We used to meet once a week but now we are too busy with life.

Point 3: In a Yes/No question, we can omit the verb and reply by with just used to followed by but and a reason.

(Q) Do you you and your family travel much?
(A) We used to but now we don't have time.