Living for today not tomorrow

Sarah talks about things she wants to do in the future and why she lives in the now.

Adam: Today we’re talking about bucket list. Things you want to do before you die. Do you have anything?

Sarah: Actually, no. I don’t have a bucket list. And the reason why is because I’ve already done or I’m currently doing the things that I want to do. In addition, I like to live in the now, so like the present, like what’s happening. So I really don’t think of the distant future very much, just like what’s in front of me.

For example, I’m going to Singapore soon, in about 10 days. And I’m really looking forward to that and the new adventure and things that I’ll get to do there.

Adam: What sort of things do you have in mind to explore in Singapore?

Sarah: First of all, swing dancing. My favorite kind of dance currently is Lindy hop swing dancing. And Singapore is one of the places in Asia that has several swing dance meet-up groups. So I look forward to dancing several of the nights while I’m there, but also trying all of the delicious food and just exploring a country that I’ve never been to.

Adam: Yeah. Those are really great things. What are your two degrees in?

Sarah: My first degree is in teaching English to speakers of other languages. This degree allows me to be able to live in other countries and to teach English. And then my other degree is in global studies. So it’s like an inter-cultural degree where I learned about different cultures and religions.

Adam: That’s really great. Have you ever eaten anything exotic or had any really interesting experiences that most people might not have had when you’re traveling to these different places and fulfilling your goals?

Sarah: I’ve definitely eaten a lot of different things, most of which I’m not really sure what a lot of it was. The strangest probably – jellyfish, maybe. I’d also gotten a chance to ride a lot of different animals. I’ve ridden a camel, donkey, horse, elephant, and even an ostrich. So that’s pretty exciting.

Adam: Yeah. That’s really interesting. Have you done any other extreme activities?

Sarah: Yeah. I’ve been skydiving before. I’ve been volcano boarding. I’m trying to think what else I have done. I haven’t been bungee jumping. I think that’s probably one of the only ones that I haven’t done as of right now. But I really have no desire to do that one, so.

live in the now

When you live in the now, you do not think of the future very much. You enjoy the present. Notice the following:

I don't think of the distant future very much.

The distant future is far away in time. The immediate future, or near future, will happen soon. Notice the following:

What do you have in mind?

When you have something in mind, you are thinking about it. Notice the following:

A meet-up is a meeting, or a time and place people plan to get together. Notice the following:

You’re traveling and fulfilling your goals.

When you fulfill your goals, you achieve your goals. Notice the following:

I really have no desire to do that one.

When you have no desire to do something, you do not want to do it. Notice the following:

in the now • distant • in mind
meet-up • fulfill • no desire

1373 Sleeping Patterns
How much sleep do we need?
﻿
INT 6
Spencer / Curtis

1371 Her Dream House
Spencer talks about her dream house. 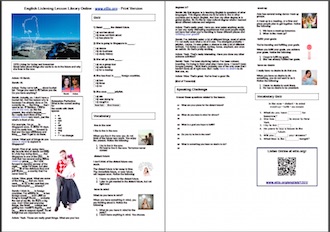 Get the PDF, Answer Key and Bonus Audio