Meg talks about how to make truffles, which are bite-sized chocolate desserts.

Todd: Okay. So Meg, we’re talking about baking. And in the last one, in the last interview, you mentioned cake pops and some other stuff. Now you also mentioned truffles. What is a truffle?

Todd: Okay. Now, I sometimes hear the word truffles like something that pigs find under the trees. Is it the same word?

Meg: Yeah, different – no. Well, same word. Same word but those are a type of mushroom, I think. 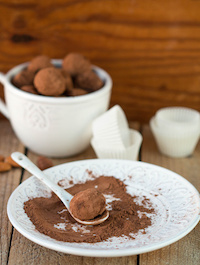 Todd: Right. And they have nothing to do with each other.

Meg: No. I mean maybe someone has made a mushroom chocolate truffle before. I’m not sure, but not me.

Todd: Okay. So are truffles easy to make?

Meg: They are – they’re time consuming. So I don’t think they are difficult to make but you have to have the time to put in because you need to make the inside chocolate part first and mix together the ingredients and then form – I always did it by hand – form all the little balls so that you can dip them in chocolate. And so, one batch could usually get maybe 60 truffles. So probably I had to spend a few hours working on a batch of truffles.

Todd: Can you go through the process, like how do you make them from start to finish?

Meg: So probably my favorite ones are like an espresso chocolate kind where you would – I need some chopped up chocolates, more like baking chocolate or really dark chocolate or if you want milk chocolate, you can use it. And then mix that with some heavy cream and butter on the stove. And if there’s any flavor, you’re going to add. And so if it’s like a coffee flavor, you can add some coffee grinds and later strain them out, so it has that flavor.
And then…

Todd: And that’s the inner part that you’re working on?

Meg: Hmm. And so, then you’ve made that and so it’s still pretty thin, more liquid-y. And so you need to put it in the fridge to let it firm up for – it can take – that recipe can take a few hours before it’s ready. And then once it’s ready, I just use like a small spoon to scoop a little out and then use my hands to roll it into like a ball shape.
And then let that sit, and then I had to put it back in the fridgebecause your hands kind of warm the chocolate back up. And then once it’s out, you can use a special dipping fork or just a regular small fork and have some melted coating chocolate that you can get at craft stores where there’s fancy kinds or cheap kinds or whatever. And then you need to dip each ball individually and put it down on wax paper, like a special paper that it won’t stick to.

And then you let them – if you’re going to add anything on top like sprinkles or anything, you can do that then. And then that’s it. You’re done.

Todd: Wow. And then you just put them on the fridge. You chill them, right?

Meg: You don’t have to. They’re better actually if keep them out of the fridge because if you put them in the fridge then you maybe have to handle issues with it going from cold to warm. And chocolate – you might not know chocolate – if it gets too cold sometimes or like frozen, little white spots can come to the surface. And so it kind of ruins the prettiness of the chocolate. So you can just leave them out.

Todd: That’s good to know. Thanks. Well, I might give it a try but it still sounds pretty hard.

Something that is bite-size is small and easy to eat in one bite. Notice the following:

I needed to chop up some chocolate.

When you chop something up, you cut it into small pieces. Notice the following:

put in time / the time to put in

You have to have the time to put in to make them.

When you put in time for something, you give yourself extra time to do it. Notice the following:

You can add some coffee grinds and later strain them out.

Coffee grinds are coffee beans ground up into powder. Notice the following:

Just put them in the fridge.

A fridge is a shortened word for refigerator. It is the common expression people use for refrigerator. Notice the following:

1376 Living for today
Life with no regrets