Meg and Todd discuss grooming and how often they clean their teeth and shave parts of their body.

Todd: Okay. So Meg, this week we’re talking about just grooming habits and stuff. So let’s go now to like out teeth. Now, the dentist says you should floss every day. Do you floss every day?

Meg: Now, I do actually. I’m pretty consistent with it because a couple years back I had some cavity issues that I didn’t want to go through again. And I wasn’t good about flossing before that but the dentist said that if I flossed and used mouthwash regularly, probably it could be avoided. And so ever since then, really every day, I do it.

Meg: Yeah. What about you? 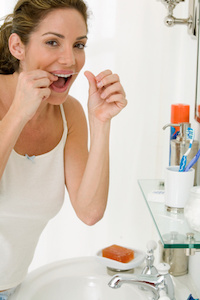 Todd: Well the dentist always says you should floss more. I’m pretty good about every other day. And then every now and then I’ll get it on a binge, like, “Oh I’m going to floss every meal like I’m supposed to,” but I’m pretty good. I brush my teeth twice a day. I know some people at work, I see them brushing after lunch.

Are you one of those people that brushes their teeth three times a day?

Meg: No, I do twice a day also. Do you do morning and night?

Todd: Yeah. And actually, my dentist told me don’t do it three times a day because if you do it too much, it could do damage to your gums. Plus, he said I was brushing my teeth too hard. So I was pushing my gums back.

Meg: Yeah. I actually had the exact same experience. Earlier this year, I went to the dentist because I felt like I maybe had some cavities because I had sensitivity in my teeth, and I was also brushing too hard because I was working, so I really want them to be so clean. And so my gums also were receding a little bit.

Todd: Yeah, and so painful when it happens. You realize you have to reverse it, you know.

Todd: I have one. I use it sometimes.

Meg: Well how does it work? What does it do?

Todd: It’s just you’re raking leaves. You just put it in your mouth and you just scrape your tongue. And you do get some stuff that comes off of it and you’re like, “Oh wow.” But yeah.

Todd: It is a little bit gross, yeah.

Meg: But good for your mouth.

Todd: Yes, definitely good. Definitely good. So then the other thing I guess we can talk about is a shaving now. So I’m the guy, so I have the facial hair.

Todd: But I’m pretty lucky. I only have to shave maybe twice a week.

Todd: I can get away with it, yeah.

Todd: Yeah. I don’t have the full on manly beard thing that comes out, so.

Meg: Yeah, yeah. Some people have to shave like twice a day, so that seems like it would be inconvenient.

Todd: Yeah. So do you – I guess because you’re a woman, do you have to do the legs thing?

Meg: Yes, yes. I do shave my legs pretty much every time I take a shower.

Meg: Yeah. Well yeah, it is annoying. I actually really don’t like it. I wish I didn’t have to do it. And I mean, I guess I could choose to stop, but I’d rather do it. So yeah.

Meg: Usually every time I take a shower because then if you’re wearing a skirt or shorts, it’s visible. So yeah, I’m just trying to be careful

Todd: Wow. Honestly from a guy’s perspective, when I look and I think about women shaving basically their calves below their knees, it looks like it’d be very easy to cut yourself because your legs are kind of hard, do you know what I mean?

Meg: Yeah. Yeah. I think for the calves, it’s not so bad because it’s kind of a straight – it’s more smooth, but the knee part, you have to be careful.

Meg: Because it’s like a shape, and the ankles and feet.

Todd: Yeah. That’s like for guys our problem is right under the chin and then the Adam’s apple. The Adam’s apple is brutal because you kind of have to go around it, so it’s very easy to cut yourself.

Meg: Yeah. Do you use an electric razor?

Todd: No, I should. I’m very environmentally unfriendly. I use those plastic razors because they’re just so easy.

Todd: And actually, I kind of get away with it because of the gym I go to. They offer it. They have free razors in the men’s room. So I just do it there, save a few bucks.

My gums also were receding a little bit.

When something recedes, it moves backwards or slowly loses the area it covers. Notice the following:

That sounds kind of gross actually.

Gross means something is very disgusting, or hard to look at or eat. Notice the following:

The calves are the part of the legs between the knees and feet. Calf is singular, and calves are plural. Notice the following:

The Adam's Apple is brutal because you have to go around it.

The Adam's apple is found only on men. It is a bump on a man's neck where the throat sticks out. Notice the following:

I get away with it because of the gym I go to.

When you get away with something, you don't do something you should, and there is no penalty. Notice the following:

Save a few bucks.

The term 'bucks' is slang for money in American English. Notice the following:

receding • gross • Adam's apple
calves • get away with • bucks

1399 Shower Schedule
How often do you shower?
INT 6
Luis

1398 Power of Personality
What kind of person are you?
﻿
INT 6
Abidemi /Rory

1397 Introverts and Extroverts
Are you outgoing?
﻿
INT 4
Adam / Sarah