Meg and Todd talk about taking showers and how their lifestyles affect when and how often they bathe.

Todd: So Meg, I have an interesting question for you.

Meg: Yeah. It seems a little crazy to me.

Todd: That’s odd. Like, you know, I thought that was kind of the norm actually these days. 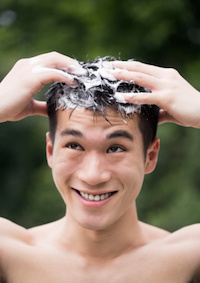 Meg: I don’t think I have ever known anyone who’s taken three showers a day.

Meg: Do people that you know take three showers a day?

Todd: I think I just assumed that all of my friends kind of did the same thing because they are guys and they also play sports. So they also take a shower – so yeah, when they wake up, before they go to bed and after they work out.

Meg: Yeah. Well, I guess sports or working out definitely makes a difference. I might totally frighten you with the showers that I take because I do not shower three times a day. Typically, I shower once every two days.

Meg: Yeah, because especially with my skin, it gets pretty dried out if I’m showering so often with the soap and the water and everything. So I have to be careful with that. But if I’d played sports or something where I got sweaty, I’m definitely taking a shower after that, an extra shower. But yeah, I’ve never taken three showers in one day I don’t think.

Todd: Well so you – even when it’s hot in summer, you just do it once every two days?

Meg: If I get sweaty, then maybe more than that. But I don’t sweat very easily, so I usually don’t have to worry about it.

Todd: Oh wow. No I think it must be what your skin gets conditioned to because one of the reasons why I always take a shower is not that I feel dirty. It’s like I feel like my skin gets itchy unless I take a shower.

Meg: Yeah. Yeah. And it might be because – well and I think there’s a difference too with where I lived in America and living here in Japan like the humidity is different. And so my skin gets more dry here actually. It has the opposite effect. So I had to be more careful here maybe than I did in America.

Todd: Yeah, that’s true. So what about – so washing your hair, you wash your hair every two days?

Meg: Yes. I wash my hair every two days, use conditioner maybe once a week. My hair would also get super dried out. I don’t know if you can see it, but it’s a little frizzy right now. So that’s how naturally is my hair type, too. So maybe your hair type handles well getting showered, washed three times a day?

Todd: Yeah. I mean, well for one, I wash my hair usually twice a day, sometimes just once. But always after I work out, I have to wash my hair. But one thing I never, ever do is use conditioner. And I don’t understand why people use conditioner on their hair.

Meg: Well, short hair maybe you don’t have to worry about it as much.

Meg: But with longer hair, and especially earlier this year, I had hair quite a bit longer than this even and the ends get dried out very easily. And they don’t replace like the hair oils because it’s coming from the roots. And so you have to add some extra moisture into the hair if you want it to stay looking decent. So yeah, probably more important to condition long hair than short hair.

Todd: Okay. Yeah, because I’ve never understood why people use conditioner because when I use it, it just makes my hair seem waxy.

Meg: Maybe you’re using too much conditioner or not washing it all out.

Todd: Maybe. I don't know. I have to learn how to wash my hair. Okay, cool.

She thought that was absurd.

Here, absurd means crazy or something that does not seem wise. Notice the following:

In this situation, odd means interesting or not common. Notice the following:

When you frighten someone, you scare them. Notice the following:

That is the norm these days.

The norm refers to what is normal or common. Notice the following:

Your skin gets conditioned to it

Here, to get conditioned means to get used to something. Note that conditioner refers to a product you use for hair. Notice the following:

1400 Brush and Shave
Do you brush and shave every day?
INT 6
Luis

1398 Power of Personality
What kind of person are you?
﻿
INT 6
Abidemi /Rory

1397 Introverts and Extroverts
Are you outgoing?
﻿
INT 4
Adam / Sarah