Katie talks about how students can vary in personality by age as you teach them. 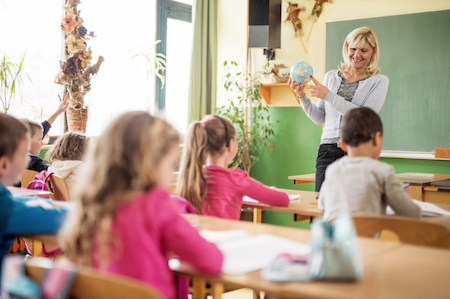 Aimee: So Katie, you're a teacher.

Aimee: What is your favorite age group of students?

Katie: Probably my favorite age group is around the junior high school age. So from about 11 to 15.

Katie: I think they're the most interesting to teach.

Aimee: What makes them so interesting?

Katie: Yeah. So they're still like, they're still young kids. I can still teach them stuff but they're old enough to also do stuff by themselves.

Katie: So it's like the perfect age group to teach, I think.

Aimee: That's right. What about things like behavior and attitude? I just imagine that age group to be quite challenging. I mean, there's a lot of hormones going on and, you know, personalities are forming, so.

Katie: Usually when in their first year of junior high school, they're fine because they're all still like, they're still babies. They've gone from being the oldest kids in elementary school to like the babies at junior high school.

Aimee: So the second year is the challenging year.

Aimee: Well that works in both ways, huh?

Katie: Yeah, it does.

Aimee: So do you have any particular strategies or tips for dealing with that difficult age?

Katie: Yeah. Just treat them more like adults and they respond to it really well, I think.

Aimee: So you find they step up to the – they meet the expectations.

Aimee: Have you ever had any particularly challenging moments in the classroom?

Katie: Of course. Yeah. I mean, I've had kids like throw textbooks out the window.

Katie: I've had kids like punch their fists through walls like just – yeah, I've had lots of angry kids. But they're very rare.

Katie: I've had lots of them but they're rare.

Katie: In terms of like overall in a class, there's usually only one in each class that's a troubled student. But I mean, that's anywhere. That happens anywhere.

Aimee: That's true. So how do you deal with troubled students?

Katie: I think that's a very difficult question. There's no like textbook way of dealing with troubled students in general because every kid is different. Every kid has a different problem. Every kid is acting out for different reasons. So you have to find out why they're troubled, why they're acting out and try and deal with it in the best way you can.

Katie: Yeah. Don't get angry. It was probably my best advice even though you feel like strangling them sometimes. But just try and be patient, try and figure out why they're acting out and just deal with it from there.

Aimee: Yeah. Nine times out of ten, staying calm is probably the best option, isn't it?

Katie: Hmm. And the one time out of ten, is when you really need to get really angry. That's the scary time.

Aimee: Just get your power back perhaps?

They start getting a bit grumpy in class.

When you are grumpy you are in a bad mood and you are not happy. Notice the following:

I've had kids punch their fists through walls

When you punch something, you hit it hard by hitting it with your fist. Notice the following:

There's usually only one in each class that's a troubled student.

A troubled student is a student with problems who often rebels in class. Notice the following:

Every kid is acting out for different reasons.

When people act out, they behave badly to get attention or because they are upset about something. Notice the following:

nine times out of ten

Nine times out of ten, staying calm is probably the best option.

The phrase nine times out of ten just mean usually. Notice the following:

They just are maybe showing off to the class.

When people show off, they act a certain way to get attention, feel special, or get noticed. Notice the following:

Video 1444
When did you like school the least?
INT 5
Lucille

Video 1444
At what age did you hate school the most?
INT 4
Lucille

Video 1443
At what age did you enjoy school the most?

Complete the sentences with the words below.
show off • punch • grumpy
troubled • act out • nine times