Meg talks about being a medic in the military and what medics do to help people. 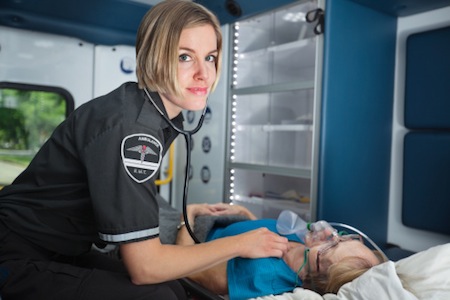 Todd: So Meg, you are talking about being in the military, and you said you were a medic. Can you explain what that is?

Meg: Yeah. So a medic, which now I believe is called health care specialist, is – I always say it's kind of similar to being like a paramedic where it's not a full nurse job. I think nurses have more training like in civilian side nurses, but similar to paramedic where you have certain, like, minor procedures that you're trained to do and high-level things than just an EMT like doing IVs and giving shots and stitches and things like that. 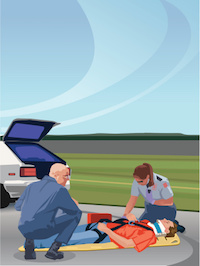 And you're trained – because it's the military, you're especially trained for emergency situations, and how to treat someone who has maybe some serious life-threatening wounds. So that's a medic.

Todd: Wow. That sounds like a really difficult job. I mean, it's not your typical, just soldier job. You must have had a lot of schooling and education.

Meg: I had – well, everyone goes through the initial, about two and a half months like basic training. And that's more kind of basic combat skills and physical training that kind of thing. And then I had four months past that to train to be a medic. So we went through like emergency medical technician course just like civilian side. I got certified with that. And then we had additional training for the military skills like IVs and emergency procedures, that kind of thing.

Todd: Right. Can you explain what IV is?

Meg: IV is an intravenous – like getting fluids into your body. So if you've been injured and you've lost a lot of blood or maybe you're dehydrated and you need some fluid in your body quickly, then we stick a needle into your vein and then the fluids go in. And the needle comes back out but a little tube stays in. And then you can get fluids quickly that way.

Todd: So anybody that's been to the doctor knows that's always kind of the anxious moment when the nurse or the person who's going to stick the needle in. Were you good at doing that?

Meg: So once I learned how to do it, I think I was pretty good. And I actually enjoyed doing it, not in a creepy way but, you know, it was – I guess, because I was decent at it that it was a part of my job that I enjoyed.

But for myself, before we went through that training, I actually became dehydrated and needed to get an IV myself. And I was terrified because I really hadn't had that before in my life. And so, the nurse was going to come, you know, put the needle in my arm and I was like, "No, isn't there another? I'll just drink a lot of water." And she was saying, "Aren't you going to be a medic." And I was like, "Oh, I haven't trained yet. Don't do it." So yeah.

Todd: Oh, that's cool. Yeah. I was recently in the hospital and they had me strapped up for both blood and for the water, the intravenous drip. And it's annoying because you can't really move, like if you want to get up and walk anywhere, you're strapped with all these tubes. And it's not very convenient.

Meg: Yeah, yeah. Or at least you have to careful. When I was getting the IV, I didn't know that the needle doesn't stay in your arm. Now, for some things, it does. For blood, maybe it's different, I'm not sure. But yeah, so I was trying to be so careful too but you still want it to go well so you don't want to move very much.

Todd: Right. So what percentage of people would you say freak out when they get the needle?

Todd: Right. Yeah. Nobody likes that.

Meg: Yeah. That's interesting because I became a medic in the military because I thought after I – when I could continue college that I would be a nurse or a doctor. But my time serving as a medic helped me learn that that was not what I wanted to do for my career after all.

So I definitely am glad that I had those skills and the things that I learned and was able to experience. But I had – English had kind of been on the back burner. And so then I said, "Okay, let me revisit this," and it led to English education.

Todd: Wow. Have you ever thought about being like an English specialist for people in the medical fields like teaching doctors and nurses?

A health care specialist is like being a paramedic.

A paramedic is a health specialist who gives emergency aid to people outside of the hospital. Notice the following:

You are trained to do minor procedures.

A minor procedure is a small operation or quick treatment to a health issue. Notice the following:

If you are injured, maybe you become dehydrated.

When you are dehydrated, your body needs fluids and water.

They had me strapped up to tubes.

A person on a hospital bed can be strapped up by having lots of tubes and monitors attached to them.

When we say 'They'd be like' we mean 'they would say'. Notice the following:

on the back burner

English had kind of been on the back burner.

1369 Women in Uniform
Meg talks about being a woman in the military.
INT 4
Marriane

Video 1370
Would you like to be in the military?
INT 4
Abidemi

Video 1369
Women in the Military

1368 What are you good at?
Abidemi and Rory talk about things they are good at?
﻿
BEG 3
Abidemi / Rory

1366 Her DoOver
What would Sarah do over in her life?